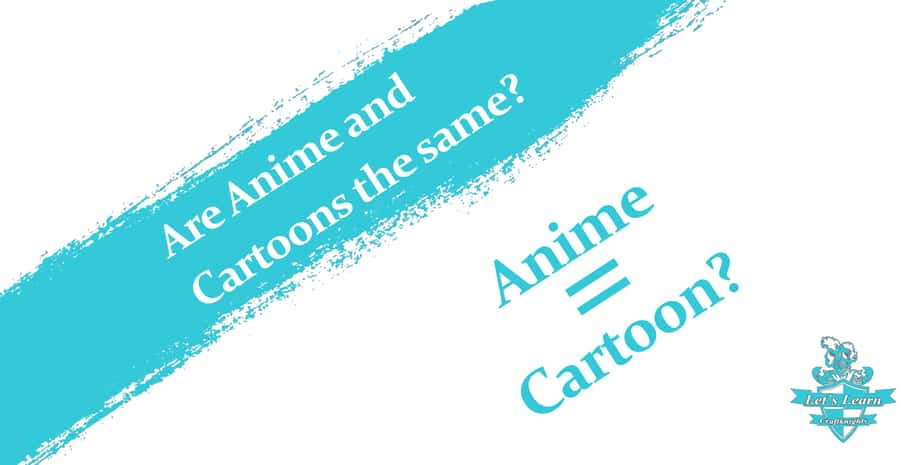 Here is a question that usually sparks a big conversation. Most Anime Fans will say “No” Anime is not a Cartoons and most cartoon Fans will react similarly. But if we look at it from a very neutral standpoint then what are the differences? I took a very close look and here is what I found out!

And are Anime and Cartoons the same? Per definition, an Anime can be categorized as a Cartoon but a Cartoon can´t always be categorized as an Anime. An Anime is a more stylized Animation that is almost always produced in Japan and differs in some specific ways from normal Cartoons.

Why can Animes be categorized as a cartoon but not vice versa?

To explain that statement we first have to take a look at the definition of both of these words.

A film using animation techniques to photograph a sequence of drawings rather than real people or objects.

Defenition from Oxford Dictionary. Here is a direct Link.

A style of Japanese film and television animation, typically aimed at adults as well as children. Compare with manga.

Defenition from Oxford Dictionary. Here is a direct Link.

So why are so many Comics not categorized as Anime? That is because Anime is a very specific genre that is typically aimed at adults as well as children and the Anime drawing style is a very specific one as well. Similar to cartoons but very different in many aspects.

Also, most Anime is from Japan. It is not clear if an Anime has to be produced in Japan in order for it to be counted as an Anime but only a very small fraction of Anime is produced outside of Japan. So in some definitions of the word “Anime”, the Animation has to be created in Japan.

Also many argue, that Anime has a certain cultural thumbprint to them, that distinguishes them even further from Cartoons.

The Differences in Style

There are quite a lot of differences in the art and storytelling style as well as the genres.

Diferences in the Art Style

The art style is similar but by far not the same. Animes were inspired by cartoons but developed in a whole other direction. So they are sharing the same “ancestor” so to speak but they are not closely “related” nowadays.

Anime have very big and colorful eyes, where Cartoons have big eyes as well but they are normally not very colorful and don’t have pupils as big as Anime characters generally have.

Both styles are very specific but especially Anime characters are abstracted further than comic characters and Anime, in general, is a very simplistic art style. Simplistic does not mean easy to draw though!

The animation is very different as well. Where comics usually “act” out a lot of the emotion via the whole body through over the top drawn motion and reactions, Anime is much “calmer”. Anime characters show their emotion mainly through the face or more specifically through their eyes. And not so much through their body.

While there are slapstick Anime out there they are by far not as overly energetic in their animation as most cartoons are.

Comics are a little different in their storytelling but if they tell a story, then they mostly follow a three-act structure. Here is a Wiki Article explaining what a Three-act-structure is. But basically, it is the way, that most of our western Storytelling is structured.

Animes, however, like to deviate from that structure and are generally much more likely to play with the narrative and experiment with new ways to tell a story.

Most Anime and Cartoons have one or more protagonists and follow them through their journey. In that point, these genres are both very similar.

There are a lot of genres, that both Anime and Cartoons share. But some Genres were actually pioneered by Animes. One such example would be the “Harem-Genre” or the “Mecha-Genre”. Both of these Genres were non-existent before Anime and both Genres became massively popular among Anime Fans actually sparking some western productions that count to these genres.

The Differences in culture are a big point as well!

Not only the visual styles or the Storytelling style is notably different. The difference in culture is a big one as well.

Anime almost always play in a Japanese or Japanese inspired Universe. There are a lot of cultural things, shown in Anime, that cartoons don´t.

Some examples of Japanese culture seen in Anime are Bathhouses, the food, Uniforms, Manners of the characters, Behavior of the characters, Architecture and so much more. Even though cartoons are created in America, you don´t have that much of a cultural thumbprint as Anime has.

In fact, these cultural differences actually make it a little difficult to translate anime for the western market. That is the reason, why sometimes in western translations, you have a weird scene in an Anime, that is hard for us to understand or a textbox explaining something on screen or characters explaining a certain object offscreen so that we know what is going on. Japanese watchers don´t need these Informations because they just know these things.

I´m sure you have seen or had similar moments while watching Anime.

Animes were Inspired by Cartoons

The Anime Style, that we know and love today, was developed because of the very tight budget, that the first Japanese Animators had. So they had to use some tricks and they had to simplify the already simplified cartoons even further and to the Anime-style came to be.

If you want to know more about the origin of Anime, then you can read this Article here, where I explain it in detail!

1 thought on “Are Anime and Cartoons the same? An Answer based on Facts.”