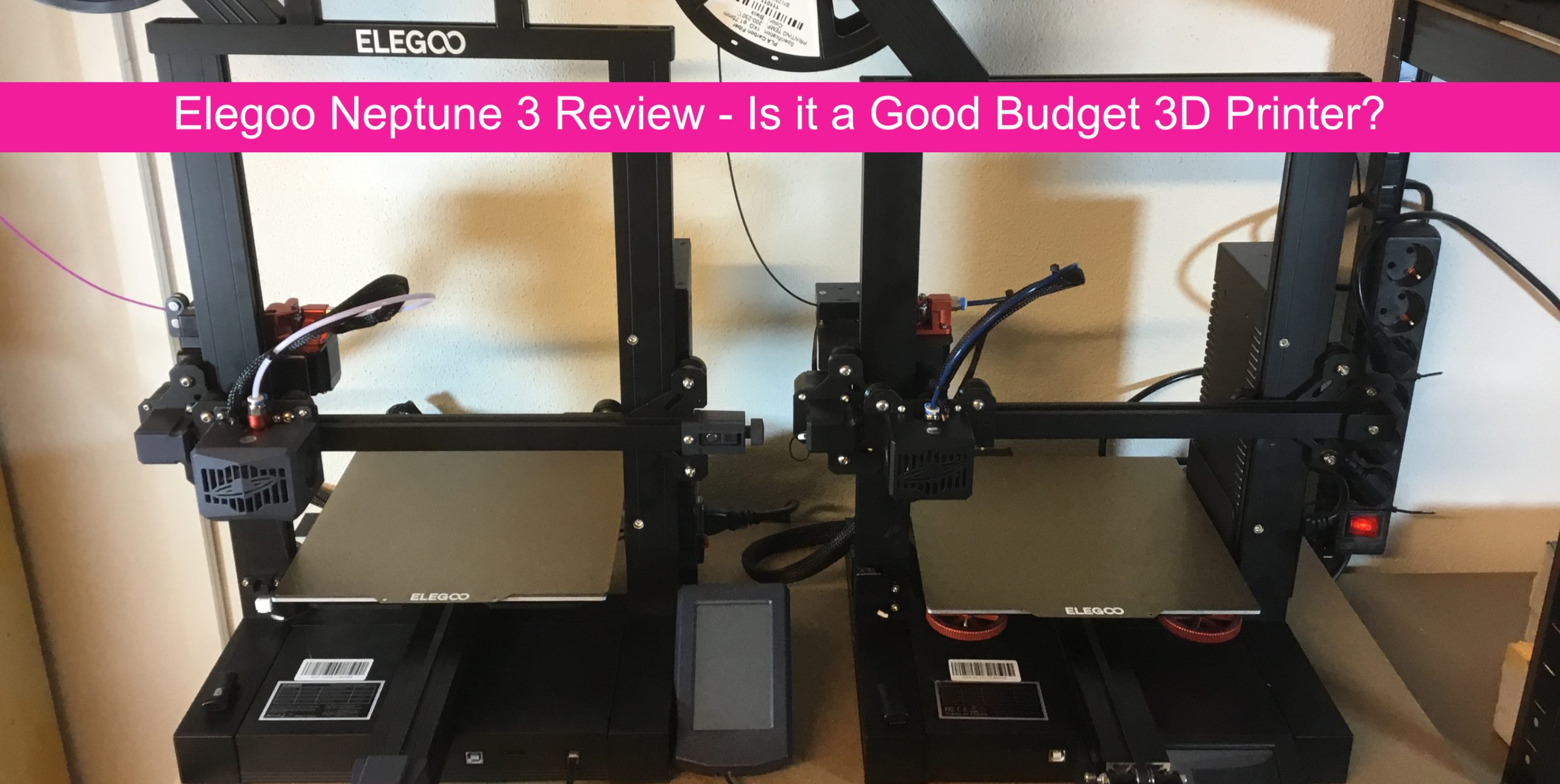 As a whole, the Neptune 3 from Elegoo is a cheap and capable 3D printer that is able to print PLA and ABS. The Neptune 3 has auto bed leveling, a removable touch screen, a print volume of 220 x 220 x 280 mm, and the printer comes mostly pre-assembled. It is a great printer for hobbyists and professionals on a budget.

The Neptune 2 was already a great budget printer but then Elegoo took a look at the community and how they modified the Neptune 2 to make it better and decided to adopt the best mods to create the Neptune 2 S.

And now Elegoo used what they learned to create the Neptune 3. So let´s see what they did differently this time around. And if you want to get the printer yourself, here is the Link to the elegoo shop page where you can buy the printer.

Setting Up the Neptune 3

Setting up the Neptune 3 was very easy and fast. It only took me around 30 minutes from opening the package to printing the first test print.

The printer already comes mostly pre-assembled. All you have to do is mount the frame to the base with four screws, plug the touch screen in, install the filament holder, and the printer is ready.

The printer is being delivered with a very detailed manual that explains how to assemble the printer in easy-to-follow steps. Here is everything that is included in the package.

I had some trouble mounting the frame because the base has to be flipped on the side and there is only one side where the frame can be put without breaking anything.

I also had to tighten the nuts on the underside of the bed because it was wobbling but that is often the case with 3D printers when setting them up.

The rest of the assembly was perfect right out of the box and I didn´t have to tighten anything.

But there are some very subtle differences that make the 3D printing life so much easier.

But more on that later.

The Neptune 3 also has a handle on the top for easy pickup, it has a detachable touchscreen, and it is slightly higher than the Neptune 2.

Right after starting the printer for the first time, you should level the print bed.

This is usually very annoying but the Neptune 3 makes it quite easy. Simply start the leveling process by pressing the level button on the touchpad and the print head will start moving to several locations where it will touch the print bed.

Once it is done it will move to the center of the print bed where you have to use a piece of paper to set the perfect distance for printing.

Once done all that is left to do is fill the printer with some filament.

This is also easily done by selecting the prepare menu and then extruder, where we can choose to load or unload the filament.

You can also select if you want to select ABS or PLA and the extruder will preheat to the correct temperature.

The first time you load a new filament you will see a differently colored filament coming out of the extruder first before it changes to the filament color you load the printer with.

This is a sign that the extruder was tested and the residue of the filament that they tested the printer with is still inside the extruder. This is absolutely normal.

The printer is now ready and we can start our first print.

You will quickly discover that the Cura slicer (the industry standard slicer at this point) does not have the Elegoo printers in its database.

This isn´t a big problem however as we can simply choose a similar printer, like the Creality Ender 3, and correct the size of the printing bed to that of the Neptune 3.

There are also some third-party tools that can be installed to use Elegoo printers in Cura or you can use the custom Cura version that Elegoo delivers with their printers but I personally am not a big fan of either way.

I also had to adapt the speed of the printer in Cura from 50mm/s to 60mm/s which is the recommended printing speed of the Neptune 3.

I started a small test print and the printer printed them perfectly and quite fast. The layer lines were almost invisible and the stringing was minimal.

The Neptune 3 printed perfectly right out of the box. Almost no adjustment was needed.

Print Quality of the Neptune 3

The print quality of the Neptune 3 was great. The printer does what it is supposed to and that without the need to tweak anything.

I decided to print a part of the LED bridge lamp from Opossums in an upright orientation (which makes printing it harder).

There were a lot of overhangs and steep angles and the Neptune 3 printed them very well.

All the overhangs were printing fine, only with some little fragments on the edges and the steep angles were printed perfectly. As you can see in the image below.

I printed a lot of parts in PLA including some parts of the mostly printed CNC and the printer was working perfectly even after printing for around one hundred hours on it. I will update this part if anything comes up in the future.

Then I decided to print the cable holder by 3DNeural with ABS and this is where I first ran into some issues.

I had to cancel the first print because it separated from the bed. I changed some parameters in Cura and tried again. I mainly changed the nozzle temperature and the printing bed temperature up.

The next print went a lot better but it separated on one side during the print. So even though the print finished it wasn´t perfect.

I reprinted the file once more with a slightly higher bed temperature and finally, it printed correctly.

So it is quite easy to print PLA with the Neptune 3 and it is possible to print ABS as well although it is quite a bit of hassle to get the settings right.

How Loud is the Neptune 3

The Neptune 3 is advertised as being very silent and that is true if it wasn´t for the power supply.

That being said the printer is quite cheap so, a more expensive silent power supply might be too much to ask for considering the price that this printer is sold at.

It is also possible to upgrade the printer with a better and silent power supply later on if you want a silent 3D printer.

Overall, I really like the Neptune 3 and I think it is a great 3D printer for newcomers and hobbyists. I would even recommend it to some professionals who want to try out 3D printing or need a lot of affordable 3D printers for their endeavors.

Hi, I am a passionate maker and professional prop maker for the entertainment industry. I use my woodworking, programming, electronics, and illustration know-how to create these interactive props. And I share my knowledge and my experience on this blog with you so that you can become a maker yourself.