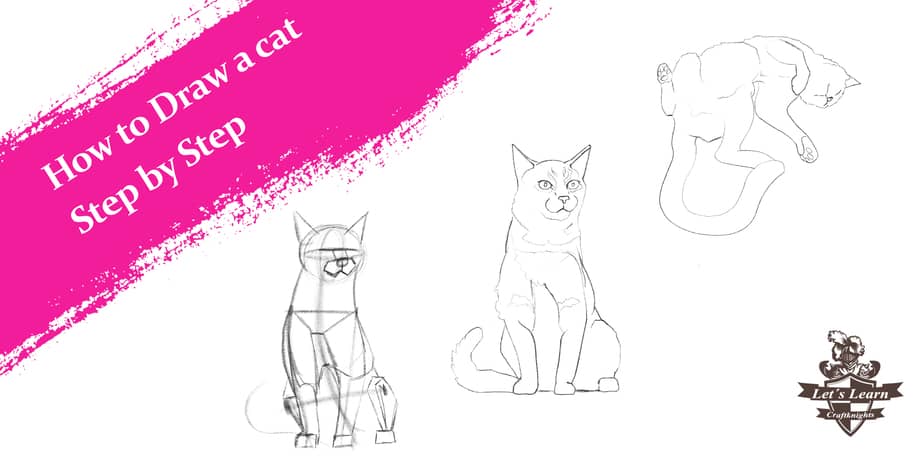 I will show you how I would approach drawing a cat and I will break it down in 8, easy to follow, steps. So let´s start drwing a cute Cat!

Tools you will need!

To keep this short, all you need is a graphite pen, some paper and an eraser.

I recommend a soft graphite pen, 3B or softer. You can also use a very soft pen (7B for example) for the dark shadow areas and a little bit harder graphite pen (HB or 2B) for guidelines and light areas of your drawing.

You can use any thicker paper, you want. I recommend simple drawing or sketch paper.

And you will obviously need an eraser. You can use any eraser, you have at hand, but I always recommend a kneadable eraser. They are awesome and if you want to draw , then you get one!

Lets start with drawing a Cat

Focus on organic forms!
Organic forms are round and curvey and have a certain flow to them. Look at some reference of the thing, you want to draw, and try to simplyfie its shapes as much as possible.

Keep the Anatomy in mind!
You don’t necessarily have to know every and each muscle of everything you want to draw. But you should have a general understanding of what is underneath the thing, that you are drawing. It will help you a lot!

I personally found drawing cats easier than drawing a rose because the form of the cat is not as hard to understand than the inside of a rose.

Lets get started with step number one

We are going to draw a sitting cat.

I am always starting with the head but this isn´t a rule in any way it is more a personal preferance.

I ony draw a simple sqpere to simplify the head of the cat. Then I try following the general pose of the cat with a single curved line.

After that I rough in the shoulders and paws and the hip. I only use lines in this step and I am not realy concerned with shapes yet.

Keep these lines light! THey are only meant as guidelines and you will erase them later on.

Now is the time to focus on some general shapes!

Don´t get into any small details yet, keep the shapes big and rough!

Also, don´t be afraid of angular lines to establish the form of the cat, you can make them rounder later on.

In this step, you can start cleaning up some of the guidelines and darken the lines, that are there to stay.

Try to draw the lines in one continuous line. This will help to keep the drawing clean.

Always keep in mind, that the thing, that you are drawing does exist in a three-dimensional world. So none of the lines will follow flatforms. These lines are defining an organic rounded form. Keeping this in mind will help you to draw a more believable organic shape.

Details are pretty easy. When you have a good foundation in the form of a believable sketch, then all you have to do is adding some details. It can be a little bit tedious but it is well worth it.

Don´t overdo it though! You want the most details at the area of the drawing where you want the viewer to look. The most detailed area in this Drawing is the face of the cat.

Rendering! The most fun part of any drawing in my opinion.

Slowly build up values in your drawing and keep in mind, that you are drawing fur. So carefully add strokes in the direction the Fur naturally grows. This will add some believable texture to your Drawing.

And with this you are done!

You can use this method to draw any cat in any position you like.

This method can be used for any pose you like to draw. Just break the pose down in its most basic shapes and work of that.

Here is an example of another cat in a more complex pose.

I first establish the general line of action of the cat. That line roughly follows the spine of the cat.

After that, I added some general shapes like a circle for the head and a few elongated ellipses for the body and the legs of the cat.

To establish the planes and perspective of the cat I drew a few rectangular lines at the belly and at the face of the cat.

After I established the rough forms of the cat I simple erased the unnecessary lines and added some outlines and details to the drawing.

As you can see, this method works in every pose. It is hard to learn in the beginning but as long as you don´t give up you will learn how to draw very fast.

If you want to learn more about drawing and shading you can also have a look at my guides on drawing a realistic tree and drawing mountains with a graphite pen, if you want to.

So don´t give up and keep on drawing!