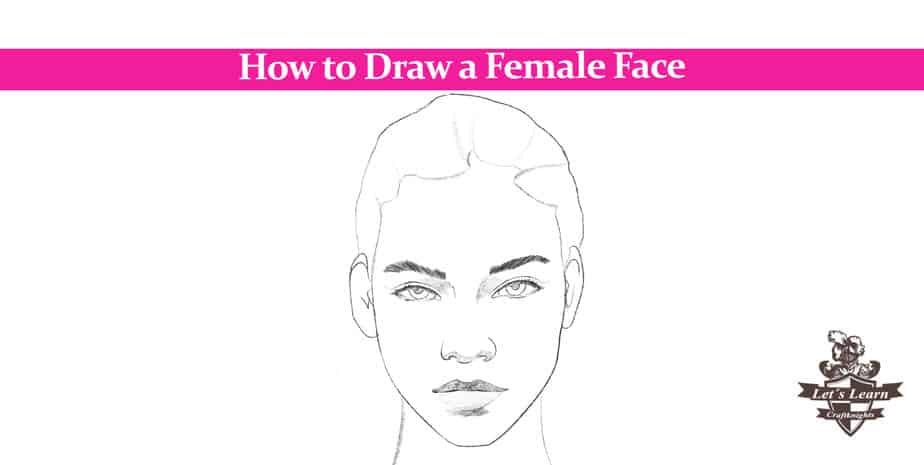 In this guide, we will learn how to draw a female face in 5 easy steps. Drawing faces is really hard because we see hundreds of faces every day so we have a really good idea how they have to look so when we draw them and there is a tiny mistake we will spot it right away.

That doesn´t mean, that you have to draw a face perfectly but I will tell you where the face has to accurate and in which parts of the face you have more leeway when it comes to mistakes.

This guide is structured in a step by step approach so that you can follow along every step and end up with an amazing result!

But before we start we will have to pick the right tools for this drawing.

What Tools You Need For Drawing the Female Face

If you don´t have the exact same materials as I used in this guide then don´t be discouraged. You can use similar tools and you will be just fine.

Step 1: Drawing the Basic Shape of the Female Face.

Take your HB-pencil and try to only draw very lightly with it. Don´t use too much pressure to draw these guidelines because you will erase them later on anyway.

We will start by drawing a simple circle. The circle doesn´t have to be perfectly round!

This line is going to be our guideline that we will later on use to define where the eyes, the nose, and the mouth will go.

Next up, we will guess where the middle of the circle is and then we will divide the distance between the top part of the circle and the center of the circle in 4 equal parts. You don´t have to do it exactly its enough to just roughly eyeball it.

Then use the point that is the closest to the center point of the circle and this point is going to be where the front head of the female face will end. In the drawing below that is the top line.

From there on measure three equal parts, that are slightly bigger, than the distance from the top line to the top part of the circle, and sketch these lines very lightly in.

I know it looks weird and it sounds complicated but if you have done it a couple of times it will be very easy to do for you. So just roughly sketch these lines in and continue with the next part, when you are happy. It doesn´t need to be perfect.

Now, that we have these four lines we can finally draw the chin of our face. The female chin is very round and not angular at all. This roundness will give the chin a smoother look and the face will look more female-like overall.

So keep your lines smooth and draw from your elbow and now from your wrist!

The jar starts thinner than the circle is. This will also help to indicate, that this is a female face. Pick two points on the circle where the chin starts.

Then pick two points, that are slightly underneath the line, where the nose is going to go later on. That’s the point where the jar is curving in towards the chin.

Then draw one continuous line starting at the point on the circle and going through the jar point towards the chin.

Don´t make the chin too pointy it has a roundness to it and is quite flat at the bottom!

And with that, you have successfully drawn the general shape of the female face!

Step 2: Let´s add the Guidelines for the Eyes, Nose, and Mouth.

In the previous step, we already established the position where the nose and eyes go. So all we will do now is further adding guidelines to feel our way towards the right placement of the features of the face.

The top line is just a straight horizontal line that is indicating where the hair ends and the forehead starts.

The second line from the top is the line where the eyes will later on go. I also added a small area, marked by two lines left and right from the centerline. This distance is the distance between the eyes and it will also establish the size of the eyes. So keep that in mind when drawing these in!

And finally, I added a line, that is slightly under the point where the jaw curves towards the chin. This line establishes the size and placement of the mouth.

Now we will add another parallel line underneath the second line. This line will establish how big the eyes are going to be.

The eyes are exactly one eye size apart from each other!

These measurements are idealized this is by no means true for every human face but by idealizing these measurements we artists have a rough guide that we can follow to draw a face or anything really, accurately. You can choose to play with these measurements once you have gotten a feel for the human body and the face.

So I used these measurements to eyeball where the eyes will end and I drew two vertical lines as guidelines.

I also drew two lines from the bottom point of the lines, that marks the beginning of the eyes, diagonally to the horizontal line that marks where the eyebrows start.

This is going to be a rough guide for the beginning of the nose later on.

Now I started adding some more detailed lines to further establish the shape of the nose and the dorm of the eyebrows.

The eyebrows generally are a little wider than the eyes. (Again there are exceptions to this)

Then I added some more detail like the form of the eyes and I gave the eyebrows and the mouth their final general form.

The forms of the eyes are actually quite easy once you understand them. I start by drawing the top part first. It is just a simple curved line.

The bottom part of the eyes are curved lines as well but in the other direction and they have a slight S-shaped curve in them to indicate the position of the tear duct.

I drew the eyes a little tilted towards the nose because a lot of female faces have these tilted eyes and it adds another little hint, that this is supposed to be a female face to the viewer.

The viewer will never consciously pick up on these little details but subconsciously he or she will recognize them and that is all we need.

The mouth simply consists of two lines as well. one rounded line with a little dent on the top right under the nose. The second line is a simple curved line that indicates the bottom lip.

I also added a small curved line under the bottom lip to indicate where the chin starts.

And with that, we have managed to successfully draws the guidelines for the female face. Now all that is missing are the details and some shading.

If you are struggling to draw the guidelines of the face, then you can download a free printable worksheet with the guidelines, so that you can better learn how the female face is constructed. You can print the worksheet and then draw over the construction lines to learn faster.

Step 3: Adding Details to The Eyes

Now we will finally start with the details.

Before we get to drawing them we first have to lighten our underdrawing a little bit. So use your kneadable eraser and roll it over your drawing a couple of times until your drawing is light enough so that you can barely see it.

then take the 6B – pencil and start wich adding the details.

We will start with the eyes. Try not to press down too hard with your pencil yet! Just trace the guidelines underneath and lightly draw in the iris of the face.

I drew the top part of the eyes darker than the lower part to give the eyes a little more depth.

The trick with drawing eyebrows is that the direction of the hair changes and gets more horizontal the further you get away from the nose.

I also added some details to the eyes like eyelashes and a little shadow area under the eyelid.

Because the eyelid has some thickness to it. Look in the mirror and look at the bottom part of your own eyelid and you will realize what I mean.

I also shaded in the pupil of the eyes to give them a little more of a focal area. So that the viewer has something to look at and the eyes don´t look dead this way.

Step 4: Defining the Nose and the Mouth and Adding Some Shadows

Finally, we will define the nose shape a little bit, as you can see below, and we added some shading to the side of the eyesockets that are near the nose.

And we also added some shading to the bottom part of the nose just to give it more volume.

Step 5: Adding the Final Details and Finishing the Drawing

Now we will just add a little more shading to some areas and we are done.

Shade the top part of the lip a little darker than the bottom part to give the illusion of light coming from the top.

Now, all that you have to do is erase the construction lines underneath and you are done. You have officially drawn a female face!

I hope you liked this guide and it was helpful to you. If you have any questions, then you can write me a comment and I try to answer it as soon as possible.

If you are struggling to draw the face then don´t be discouraged right away. It takes time to learn how to draw especially if you want to draw the human figure or a human face.

So don´t give up and keep on drawing!