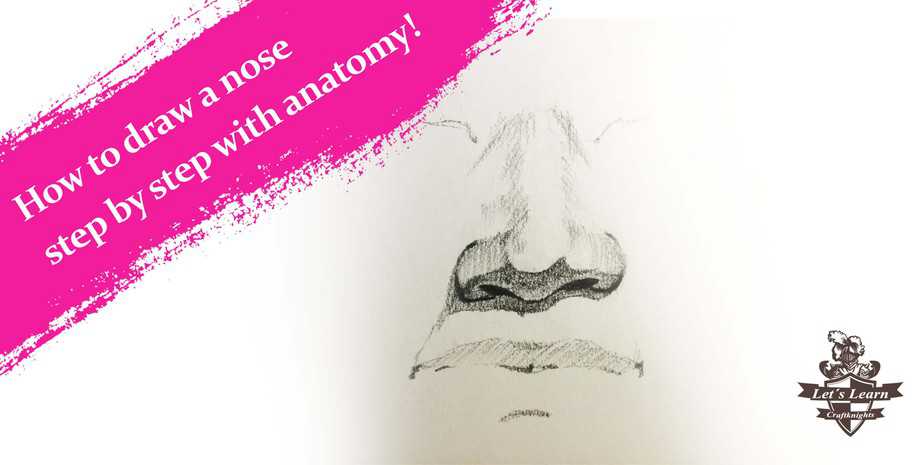 In this guide on how to draw a . I will go over the basic anatomy (don´t worry only the most important parts) of the human nose, different shapes of the nose and a step by step drawing example. So let´s start learning.

What tools do I need for this tutorial?

You will only need some drawing paper, any decent one will do, a pencil, I used a 6B but from HB to 7B any pencil will be fine, and finally you will need an eraser. I recommend a kneadable eraser because its much cleaner than a regular one but you can use a regular one as well.

The anatomy of the Human Nose

To understand where the nose is attached to the skull we will start by looking at the human skull from the side view.

The Nose will begin right at the named “nasal bone”. The Nose is composed of cartilages.

the “lower lateral cartilage”(Dark blue in the picture below).

This cartilage goes down and attaches back to the skull. The “lower lateral cartilage” is also for one half of the shape of the nostrils.

The Nose wing (light blue in the picture below) attaches to the “lower lateral cartilage” and attaches back to the skin on the skull. The nose wing will complete the form of the nostrils.

The last part is not cartilage but a .

These are not all the parts and muscles of the nose but as long as you only want to draw the nose, this is all you need to know.

We only looked at the side view of the nose though but if we take a look at the front view we will see, that all the cartilages and the are present on both sides of the nose.

Almost perfectly mirrored. When you draw the Nose from the front or a 3/4 angle you should keep this in mind.

Now, that we know the most basic anatomy of the human nose, we can proceed to draw a nose in front view.

Let´s Draw a Nose in Front View – Step by step

Firstly just draw a straight vertical line and then two horizontal lines to roughly sketch out the dimensions of the nose.

Only draw these lines very light, as they will be erased later on.

This weird looking rectangle is our placeholder for the nose.

Step 2: Establishing the Rough Shape of the Nose

Next up we will where the tip of the nose will To do that we draw a little circle at the bottom of the lower horizontal line.

And then we draw a wavy line under that circle to define the shape of the nose and the .

Under the little circle, we will ad an elongated v-shaped line for the bottom of the nose.

Now we will draw the nose wings and define the core shadow of the by erasing some of the guidelines.

Let’s erase some of the guidelines, that we don´t need anymore.

And then we will draw in a general shadow shape underneath the nose that we will shade in later on.

In this step, we will shade in the core shadows and define where the drop shadow of the nose will be.

The light in this example will come from the top right.

Now we will shade in the shadow area, that we established in the step before.

Step 5: Establishing the Drop Shadow of the Nose

Step 6: And Finally We Will Add Some Details to Our Nose Drawing

Finally we will add some shading to the side of the nose. Remember the anatomy of the nose and try to imagine where the light will hit and where shadow will be. Don’t go too dark with the shading.

And with this, we are done! don’t get discouraged, if you are struggling.

Just keep on drawing and learning and you will become better very quickly.

How to Draw the Nose From any Angle?

When you want to draw the nose from several angles from your i, then you will have to learn the anatomy of the nose und with it.

Get used to the shapes of the different and the muscles and exercise to draw them from any angle. Here are some examples.

If you just focus on the general shapes of the nose then you can draw it from a lot of different angles. Copying the drawings above and below and then trying to draw the nose in angles that you invent.

If you do practise sheets like these you will learn how to draw noses in no time!