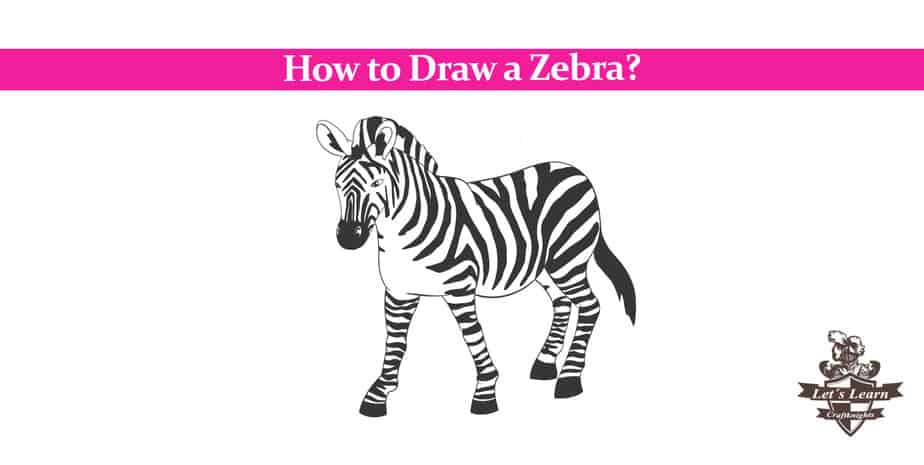 In this guide, we will learn how to draw a zebra in easy to follow steps. Zebras all have black and white stripe patterns on their body, these patterns are unique to each individual Zebra. So you can invent your own zebra stripe pattern in today’s drawing!

This Zebra drawing is going to be slightly advanced but if you take your time when going through each step, you will be fine and you will end up with a great finished drawing.

Let´s begin with the materials, that you will need for this drawing guide.

What Tools Do You Need?

I use a graphite pencil that is graded between HB and 6B for the underdrawing. It doesn´t really matter what grade the pen has but anything harder than HB is not great because you may damage the paper when you draw with a harder grade.

For the clean line art, I normally use a brush pen or a black Copic marker. It is important, that the marker, that you use does not bleed on the paper, that you want to use.

Bleeding means, that the ink spreads unevenly or over the original line, that you made, so the lines, that you draw, don´t look sharp but instead they are fuzzy looking.

For coloring my drawings I usually use Copic markers or watercolor. I colored this drawing with markers. But you can use any medium, that you are comfortable with.

You could use acrylic color, colored pencils, markers, watercolor, etc. for coloring your drawing. The most important thing is, that the kind of paper, that you use works with your color medium.

How to Draw a Zebra?

This drawing will seem quite hard but don´t get discouraged. The shapes will be slightly more advanced and complicated than in most of my other guides. If you follow each step carefully though, then you don´t have to worry.

Step1: Establishing the General Form of the Head of the Zebra

Use your graphite pencil and start by drawing a simple circle. This circle is going to be the head of the zebra.

Keep all the lines, that you draw with the graphite pen as light as possible. Don´t use too much pressure when drawing these guidelines because you will erase all of them later on.

I also drew another guideline horizontally slightly under the middle point of the circle. This line is the eye line on wich the eyes of the zebra are going to sit.

Next, up draw a straight line from the point where the ellipse and the horizontal line meet down at a proximity 30-degree angle.

Then draw a circle at the end of the line. This circle is going to be the nose of the zebra.

Now we will add the nostrils to the nose of the Zebra and we will connect the circle of the nose with the head of our Zebra with two straight lines.

And with that, we have drawn the general form of the head of the zebra.

Next up we will draw the general forms of the body of the Zebra.

Step 2: Let´s Draw the Forms of the Body of the Zebra

In this step, we will establish the body of the Zebra.

We will start with the form of the Neck. First I drew a curved line from the head down and then I drew a v-shaped line up from the point where that line ended.

If this description sounds a little bit confusing, then don´t worry about it. Just try to copy the shape seen below.

The chest of the Zebra is just a square shape with very round corners.

The stomach and back is one big square, that has rounded corners and the lower side is curved.

When you draw the legs of the Zebra I would recommend starting with simple lines, that just establish the length and the place of the ankles.

Now I will draw in the general shape of the legs.

I used circles to establish the size and location of the ankles.

The rear of the Zebra is a simple round shape, that has a triangular shape at its bottom.

I used the same steps for the hint legs, that I used for the front legs. The hind legs just have a very distinct form, that curves back away from the body of the Zebra before coming back towards it.

Congratulations, you are done with the hardest part. You now have established the general form of the Zebra.

Next up we will add some details and the stripes of the Zebra.

Step 3: Adding the Details to Our Zebra Drawing

In this step, we will add some details to the drawing of our Zebra.

We will start with the tail and the mane of our Zebra.

The mane just consists of a simple form, that follows the neck of the zebra. To make it look more like actual hair we will break the top line of the mane up with a Zick Zack pattern.

The Tail is a simple organic round shape at the rear of the zebra for now. We will add some more detail to make it look more like a zebras tail later on.

The eyes are sitting on the guideline at the center of the head, that we drew in the first step. The forms of the eyes are just simple elongated ellipses.

Up until this step, our Zebra looked more like a Mule. So its time to give our Zebra some stripes!

There are some things to keep in mind when you draw the stripes but other than that you can pretty much invent your own stripe pattern.

Drawing the stripes can be quite a time-consuming task but the result will be awesome, so don´t give up!

Step 4: Cleaning Up the Line Drawing

In this step, we will clean up the drawing, that we did so far.

Then we will take our Brush Pen or Marker and start tracing the lines, that we already established so far.

I started with the face of the Zebra but you can start wherever you want.

Try to vary the weight of your lines by varying the pressure on your marker when you draw the lines. This will make the lines look more lively and the drawing will look more dynamic.

When you are tracing the stripes you can either fill them in with pure black right away or, as I did, you can first draw the outlines and fill them later.

It depends on your preferences.

Now all, that is left is filling in the stripes and other parts, like the nose and the eyes of the Zebra.

And with this, you are done! You have successfully drawn a Zebra.

You can also check out this video below. The artist is using a very similar approach, that I always use and it may help you to understand how to construct the forms of the Zebra better.

I hope, this guide was useful to you. If you have any questions or if you are struggling at some point you can leave me a comment down below and I will answer as soon as possible.