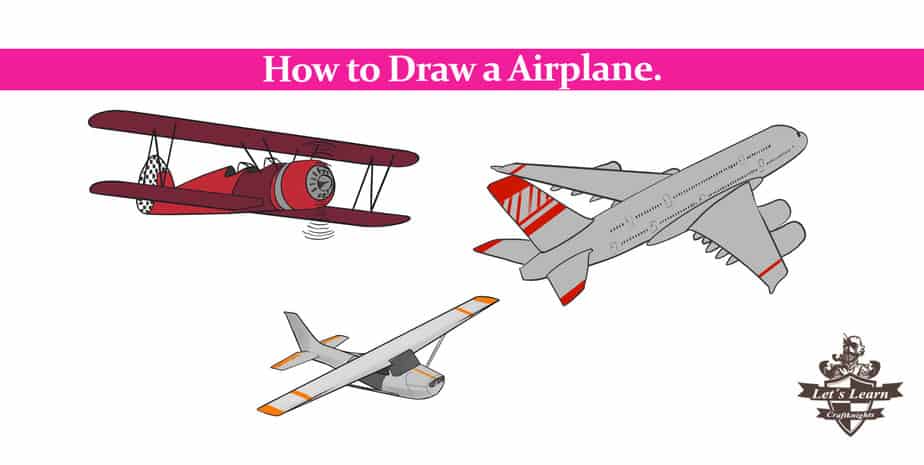 In this guide, I will show you how to draw three different airplanes in a step by step approach.

I will show you how to draw and color the airplanes.

So let´s start with our first plane!

This guide has quite a lot of steps but don´t be discouraged! The individual steps are quite easy.

First up we are going to draw the guidelines for our plane.

Keep these lines very light. Because you need to erase them later on.

So draw a line that is slightly tilted and as long as the airplane is supposed to be.

Draw the rounded tip of the airplane.

And finally, draw some straight lines proximity 90 ° to the first line you did.

Put one line at the end of the tip of the plane and another one right next to it.

Then draw another pair of these lines a little closer to the center of your baseline.

These lines are going to be your guides for the front part of the plane. You will use them in the next step to draw the circular front of the plane.

Step 2: Let’s Draw the General Form of the Front of Our Plane

Now you are going to use the guidelines that you drew in the first step.

Add one marker on each side of the 90° lines. These markers will help you to draw the circular parts of the front of the plane.

This method is good for drawing an accurate oval in perspective.

Do this with the other lines as well until your drawing looks like the one below.

Connect the two ovals on the top and bottom part like you see below as well.

Step 3: Now Let´s Draw the Rest of the Basic Form of Our Plane.

To draw the rest of our plane we obviously need the heck as well.

To draw that we have to add another guideline slightly left to the center of our basic line.

Now draw another smaller guideline at the end of our basic line and two curved lines to connect these guidelines.

Step 4: Adding the Fin of the Airplane

The fin of the plane is a simple egg shape with a little flatter bottom part.

Then we will add some detail lines in the form of a rectangle with one outwards curving line.

And finally, we will erase all the guidelines. We won´t need them anymore.

To add the wings we simply have to draw a rectangle that is 45 ° to the airplane itself.

The rectangle will touch the bottom part of the plane.

Draw these lines very light, they are guidelines!

Erase the outer lines and draw curved lines on the end of the wings as seen below.

And finally, we will add some details to the wings that will “hold” them together!

Its simply two N´s at either end of the wings and two parallel lines from the plane to the top part of the wings.

Finally, we are adding some lines in front of the plane to indicate the spinning propeller.

Draw these lines a little squiggly to indicate movement.

This is a very technical drawing, if you are struggling with this drawing I would suggest starting with a little easier drawing guide of mine like drawing a dog. In this guide, you will get a feel for line control that may help you with drawing this airplane later on.

And with this, you are done! Now let’s move on to coloring!

You only need four colors to make your airplane look good.

I used acryl color but you can use any medium you want, like oil, watercolors, markers, pens, etc. Whatever you feel comfortable using.

You should choose a dark grey and a light grey color as well as a reddish color (for the main color of your plane) and a little darker and more blueish red color for the shadow areas.

Use your main red color to color in the main areas of your plane, as you can see below.

And now we fill in the shadow areas of the airplane.

We will use the two grey colors to add some details to the airplane, like the color of the seats of the plane and the pattern on the fin of the plane.

And we have colored our drawing successfully. I hope you had fun!

I have made two more drawings of other kinds of planes if your favorite plane is not a propeller plane.

The basic principle is pretty much the same as with the first drawing we did. Only this time we will be drawing a modern sports plane that is a little more smooth looking in its basic forms.

So let’s start drawing this plane!

We will start with one baseline, that establishes the size of the plane and two lines parallel to each other to indicate where the wings are going to go.

Imagine the plane as a paper plane and draw it like one in the sketching phase.

This will help you to add some volume, later on, more easily.

So draw a rectangle down from the base guideline.

And refine the basic form of the rectangle.

and then erase the lines, that we don´t need anymore.

Step 2: Add Some Depth to the Paper Plane!

Then use these lines to draw the windows of the plane and to define the nose of the plane.

Also, add some smaller details to the wings and erase the lines, that you don’t need anymore.

And, as before, we will add some final details to bring the plane to life.

And you can obviously paint it as you like.

This is done in the exact same way as described above.

And as our final plane, we are going to draw a Boing 747!

Again, as mentioned before, the basic principle is the same as the other planes.

So let´s get started!

We will start the same way as before. We will draw a simple line that will be our baseline for reference later on.

Keep these lines light, as always.

Now we will draw two lines, that are slightly curved from one end of our baseline to the other.

The nose is basically just two curved lines that intersect each other.

Step 2: Drawing the Wings and the First Little Details.

we will draw three very elongated ellipses. One in the middle of the plane (this is also the biggest one). This eclipse is the base of our wings.

One ellipse is going to be on the top of the plane at its rear and one on the side at its rear.

We are also going to erase the guidelines, that we don´t need anymore.

Draw the wings with the same method as I showed above.

Drawing the details is the most fun for me personally.

Just add the turbines and the windows of the plane. You can draw some guidelines to help you draw the windows all in one line if you want to.

I also added some emergency doors to make the plane look bigger and a little more realistic.

I colored this plane just like the first one with the exact same method.

If you need a little help drawing these plains then you can download the worksheet for these plains above. These worksheets may help you in getting a feel for the general forms of the plain.

If you liked this guide I have a few other drawing guides like how to draw a fox and how to draw an alligator that you can go and check out if you want to.

2 thoughts on “How to Draw an Airplane? || Step by Step Guide”