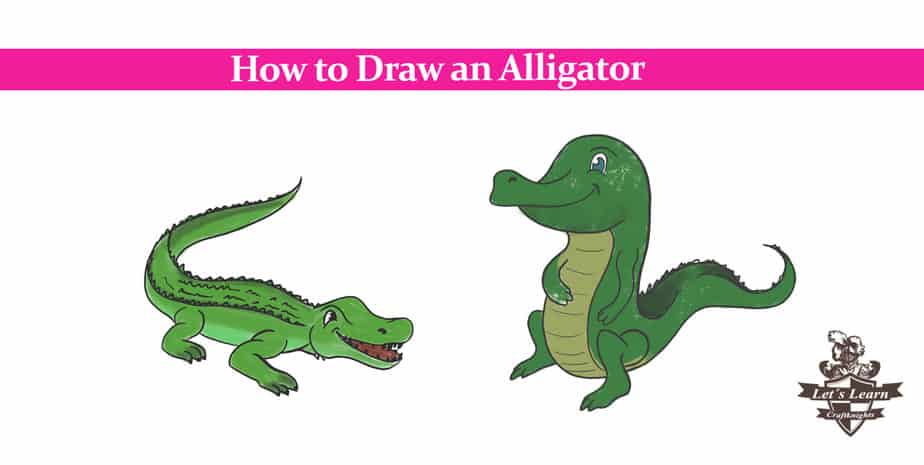 Alligators are quite easy to draw if you approach it the right way.

Even though Alligators seem hard to draw at first but if you simplify the forms of the Alligator and take your time drawing the lines carefully then you will easily be able to draw an alligator.

In this guide, I will show you how to draw an alligator in two distinctive styles.

The first style will be a simplified drawing style and the second one is going to be an all-out comic style illustration.

If you want to, you can Download the Worksheets for these two Drawings right here.

So let´s start with the first illustration!

What Tools do You Need?

How to Draw a Cute Alligator

So let´s Start wich the guide.

You should draw the whole illustration with the graphite pen first.

After you are done with the illustration then you can go over the essential lines with a marker or brush pen and after the ink is dried you can erase the graphite lines underneath to make your drawing look a lot cleaner!

Step1: Draw the First Guideline and Establish the Size of Your Alligator

Let’s draw two lines that originate from the same point and is an elongated S – curved.

This line will establish the size of the alligator except for a little bit of tail, that we will add next.

Draw another pair of elongated S-curves that have a common origin as a continuation of the tail.

Nor we will draw the basic shape of the head. The head sits right at the end of our main construction line.

Imagine the line as drawing two round little hills the one on the left a little smaller and slightly curved towards itself at its end.

This is going to be the top of the head.

Draw a little line right next to the beginning of the head-line you just drew.

This will be the brow of the alligator.

You can also add a nostril at the end of the alligator’s nose.

Add one eye right below the eyebrow and add another line that runs from the bottom of the eye to the end of the nose.

Only two more lines and we are done with the head of the alligator.

One line will be drawn from the endpoint of the upper line down towards the nose of the alligator, then it will make a sharp curve and end directly at the top line slightly below the nostril.

The last line is defining the jaw of the alligator. It will start slightly right to the eye and then move down almost circle – like just to then move all the way to where the first line takes its sharp turn.

And with this, you have drawn the head of your alligator. Now only the body is missing!

Firstly we will draw a c-curve down from the tail to where the S-line is turning.

Then we will draw a sequence of complicated-looking lines, that are actually quite easy to draw but look demanding. So don´t worry!

The first of our “complicated” lines will start as 1/4 of a circle that ends right at the end of our previous line. Then a c-curved line will be on the opposite side of the circle-line you just drew but with a little distance to it.

And the final line will be another longer c-curved line that starts right under the C-Line closer to the tail.

To finish the foot we only need a couple of final lines. one line that is parallel to the body of the alligator and then three C-shaped lines that are the top of the claws and two straight lines, that are the bottom of the claws.

And you are done with the first foot.

you can draw the front food in pretty much the same way as you drew the back one.

And so you are done with the basic shape of your alligator.

The detail phase fun is the most fun phase, in my opinion.

So let´s add some spikes on the back of our alligator and on the top of the tale.

We also add some teeth. An alligator has a few teeth, that go over the top part of the jaw. This will let your alligator look like an alligator and not a crocodile.

For coloring, you can use any medium that you want.

You can use watercolors, colored markers, pencils or crayons. Whatever you like best!

If you use watercolors, then be sure that your marker is water-resistant and your paper is thick enough for the colors.

So let´s start with finding the right colors for our alligator!

I used a light green, a saturated color, and a darker more blueish green. I also choose a very dark red color for the insight of the mouth.

I used the saturated green for most of the body of the alligator I only let the stomach blank and the insight of the mouth. And the eye as well.

Next, I used the light green to fill in the stomach.

And finally, I used the dark green to color in the claws of the feed and the spikes on the alligator´s back.

And you are done! You drew your own little cure alligator.

How to Draw an Alligator in a Comic Style

Some people actually find it easier to draw in this style. So go ahead and give it a try!

We will start with a big curvy line.

The top part is later going to be the head of the alligator and the bottom part is where the Tail is going to start.

The second line is establishing the form and the length of the tail.

Two more lines to show where the top of the tail is and where the stomach of the alligator is going to be.

Step 2: Drawing the Basic Shapes of the Head.

The second line is way easier than the first one. It´s just a c-shaped line that stats from the top part of the mouth.

Step 3: The Rest of the Body

Not let´s draw the rest of the body.

First, let´s draw another S-Curve parallel to the S-curve of the stomach.

Then we will add a C-curve to establish the right arm of the alligator and another C-curve parallel to the first one but slightly higher.

At the end of both lines, we will connect the two parallel lines with three curved lines for the claws.

Now we will repeat the same thing for the left arm of the alligator only here the two lines, that make up the arm, will be S-curved lines.

The legs of the alligator are two simple lines, that look like the letter “E” but with very round corners.

Almost the same way as above with the arms you just have to add two more lines to the feed and you are done.

Finally, we will add some details to make our alligator look more like an alligator!

The eyes will be right above the far end of the mouth.

I also added some spikes on the tail of the alligator.

I colored this drawing exactly the same way as I colored the other drawing above.

I just used slightly different greens an a dark blue for the eyes.

And you are done!

So drawing an alligator isn´t hard but it can be a little daunting because there are quite some complicated lines in these drawings and both of these drawings are in perspective.

But if you follow the steps above and draw all the lines one after another then I am convinced you will be all right and your drawing will turn out great!

If you like to draw animals in this style then you can have a look at some of my other guides like drawing a fox or drawing a dog.