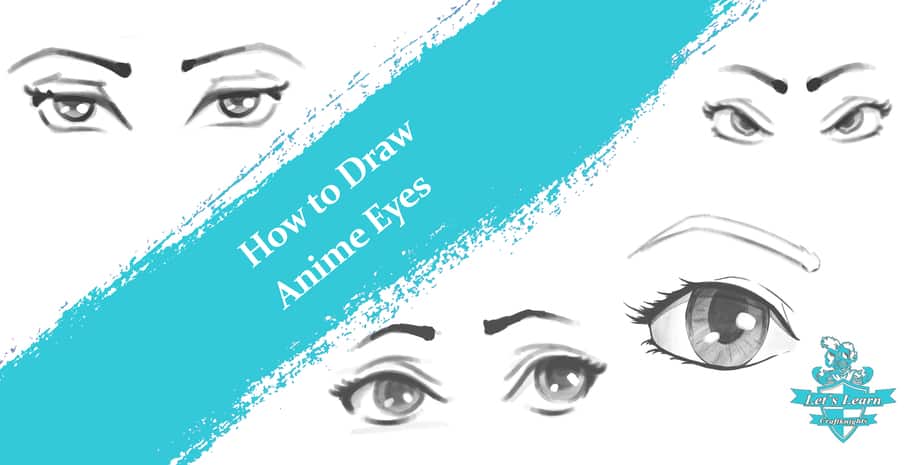 In this tutorial, I will show you how to draw Anime eyes in every style and form. You will learn how to draw Female and Male eyes and how to diversify the look of your eyes to make them unique! I will show you the Basics, a Step by Step approach and then I will give you some final Tipps.

So let´s get started with drawing some Anime Eyes!

The Tools you will need for this Tutorial

In all honesty, all you need is a graphite pen and a piece of paper. That’s it!

I would recommend a rather soft graphite Pen like a B4 or B5 but really any pen, that can achieve a huge variance in tone is just fine.

You can also just use any paper you would like even though I recommend a stronger drawing paper, something, that can survive some erasing. I usually use sketch paper or an illustration block.

You will need an Eraser and some whiteout. A kneadable eraser would be best but any eraser will do in the beginning.

This tutorial is meant for exercise purposes. So the tools I mentioned above are more then enough for you to learn how to draw Anime eyes but if you really want to create an illustration I would strongly recommend you to get a set of graphite pens that go from HB to at least 6B and you should definitely get some drawing Paper or illustration board!

The Basics of Drawing Anime Eyes

Before we get to the actual drawing part we should take a look at some Basics, that everyone should know before drawing eyes in any style.

Firstly, let´s have a look at the Anatomy of the eye. Don´t worry, you don´t have to know exactly how the human eye works but you should at least have a basic idea of the structure of the eye.

So let´s start with the eyeball. The eyeball is almost completely round. On the eyeball, there is the iris. In Anime the Iris is much bigger than normal, keep that in mind. The Picture below shows the eyeball of an Anime character. A normal eyeball would not have an iris this big.

And finally the Pupil. This is where the light shines through to the inside of the eyeball and from outside this part looks almost dark. The Pupil is also way larger in Anime drawings then it would be in reality. It is also sometimes not round but has more of an oval shape.

You can look at your own eyes in the mirror and you can see, how your eyelids also wrap around your eyeball.

Anime is nothing more, than an abstraction and simplification from real life in a very specific style. This is also the reason, why so many people and artists tell you, that drawing anime is bad.

Because you should learn how to draw the normal human figure before abstracting it. But in my opinion, it is not that big of a deal…

So take a look at the image below and you will, hopefully, see what I mean. Look especially on the left side, where the eyelids are over the eyeball. It is a little detail but it will help your drawing to look more believable.

And finally, the last thing you have to know when you draw eyes. There is a little skinfold over the top eyelid. Don´t forget to show this little skinfold! It is one of these little things, that will make the eye look better if you just think about this little detail.

How to Draw an Anime Eye Step by Step

So lets take the foundation from above and finish the eye now step by step.

Just sketch the Brow in lightly and once you are confident about the form and the way it looks you can define the form with a little darker lines.

Let’s add some eyelashes and make the lines a bit darker. When you draw eyelashes keep in mind, that you will never see every single hair individually so don´t draw them all individually. It will look weird. Instead, draw the Eyelashes as one single form and then draw some finer lines outwards. This will give the drawing the effect of individual hairs without you having to draw them individually. And it will make the Drawing so much more believable.

Add some shading and shadows! The eyelids are over the eyeball and as such, they will cast a shadow on the eye itself. This shadow is very important and will help the drawing to create the illusion of depth.

But be careful! The iris and the pupil should have different shadow tones. If you just draw one big dark area under the eyelid then it will not look like a shadow and thus the effect will now work! So slowly build up the shadow tones until you are satisfied with the outcome.

Now just give the iris a little shading. One tone that gets slightly lighter in the bottom part.

If you take a look at the image below, you will see where the light is coming from in the drawing. The shadow under the top eyelid is the drop shadow.

The eyeball is hit by the same light source, so the part of the eyeball that is visible in the far left corner of the eye will be slightly darker. Don’t forget to indicate the roundness of the eyeball with little indicators like this, when you draw eyes!

I also added some little lines in the iris to make the eye look more detailed. Don´t overdo it with these lines and don’t spread them to evenly. Nothing in nature is perfectly even or ordered.

And that was the last step. You are done with drawing the eye. Now you can take a look at how to draw a female eye and how to draw a male eye. Or rather what distinguishes them from one another.

How to Draw Male Anime Eyes

The Eye we dre above looked more like a Female eye, but why? And how can you draw a Male Anime Eye?

What makes an eye look male? The answer is pretty easy. It is slimmer, more angular, doesn´t have big light reflections and the iris is smaller.

Here is the sketch of an Eye, I made, keeping the differences from above in mind.

Not let´s add some details but we are keeping the eyelashes to a minimum and the reflections are very small. The lines are also way more angular.

Only these very subtle differences made a huge difference. You can obviously push the differences more by making the eye even slimmer and the iris rounder and smaller. Or you could also make the eyebrow bushier.

How to Draw Female Anime Eyes

Female eyes are generally bigger and rounder. They will also have bigger irises and bigger reflections in their eyes. The eyelashes will be longer and there will be more of them. The overall form of the Eyes should be softer and rounder, not angular!

As you can see in the Sketch below. These eyes look very feminine even though we did not change all that much.

How to Make Eyes look Unique

Just play around with these little defining changes and you will be surprised how many different eyes you will be able to draw! Just take a look at these Sketches I did.

Beginners Mistake and how to Avoid Them

There are quite a few mistakes, that beginners make. Here are the Mistakes, that I see the most and my tips on how you can avoid these mistakes.

The eyes look dead
When the eyes, you drew, are looking like they are dead, then you should add reflections in the eye. Reflections make an Eye look alive!

The eye looks flat
If your drawings look flat then you should check your shadows again. when you draw a shadow in the wrong place or when you draw your shadows too dark then the drawing will look flat. Also if you don´t draw the eyelids correctly (too stiff or not as if they are wrapping around the eyeball) then your eye may look flat as well.

Don´t hate your work
I know, that it can be frustrating when you want to draw something and it doesn´t turn out as you imagined it. Then you will hate your drawing or you will think, that you can´t draw in in the worst case you may even stop drawing.

The truth is, you can´t expect to be good at drawing when you start out. It will take practice and you should look at your improvements and not at your failures. Just look at what you did wrong and make it better in the next drawing. Don´t get hung up on your mistakes.

Keep it light in the beginning
During the sketching phase, you should keep your lines light. So don´t push the pencil down to hard. By keeping it light, you will be able to erase the lines easier.

Only after you feel, that everything looks good and correct, only then you should start to draw the lines darker and make them “Permanent”. so keep it light in the beginning and don´t commit too early!

Be careful about selling your Anime Fanart!
I have been to quite some anime and comic conventions and one thing, that I keep seeing is artists selling fan art of popular anime characters. This is not exactly legal in the US or anywhere else. Anime characters are all copyrighted!

So be very careful about selling your Anime fanart online or offline. You can read all about fanart and why it is illegal right here on my blog as well.

If you have questions about drawing eyes then post them below and I will answer you as soon as I can. Until then, have fun drawing and don´t give up!