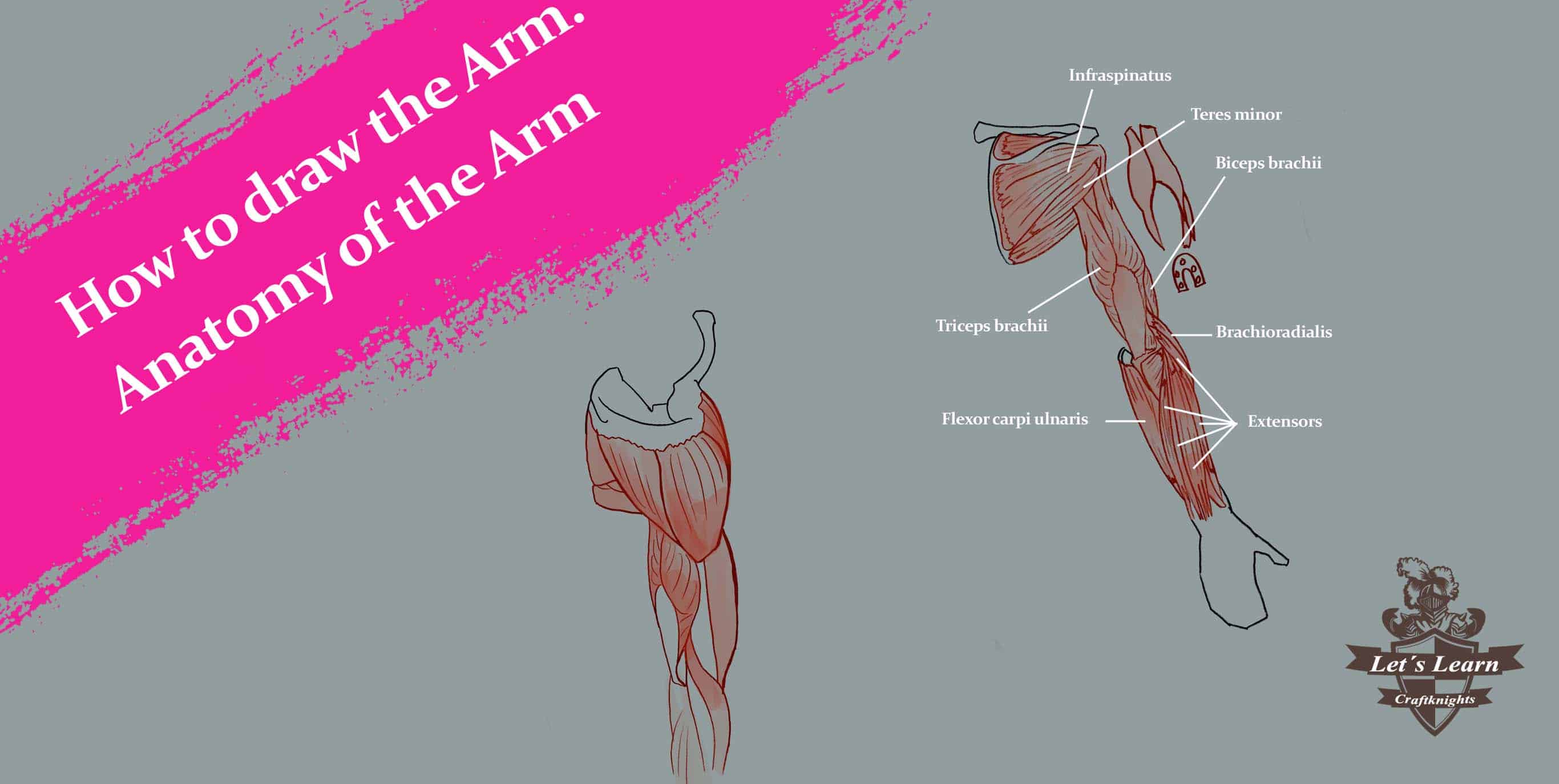 Drawing arms correctly is something a lot of artist struggle with in the beginning. And no wonder, drawing arms in different angles and making them look believable is quite hard.

But I will tell you everything, that you will need to know in the beginning to be able to learn how to draw believable arms in any position you want.

That does not mean, that you can just read this article and then be able to draw arms right away. You still have to practice and put the hours in to learn everything, that I am going to show you in this guide.

But I promise you, if you put in the time, you will be able to draw arms in no time!

What are you going to learn in this guide?

This guide is meant for beginners and intermediate artist, who want to learn how to properly construct and draw the hman arm.

I will go over the very basics of anatomy. I will show you all the most important muscles and how they work. I will not show all muscles, that are in the human arm I will really only show the most Important ones and even though I am using their proper Latin names, you don´t have to memorize their names!

Then I will show you the forms, that the human arm can be constructed with and how you can simplify and render them. This will help you to eventually draw the arm with all the muscles from your memory.

Finally, I´m going to show some examples of the arm in motion and how you can simplify the muscles of the arm to look realistic and believable.

Before we start with the anatomy of the arm, let´s firt take a look at how muscles actually work.

How do muscles work?

We are not going over all the exact details of how muscles work exactly but I am going to quickly tell you the very basics, that you should know.

Now, that you have a basic understanding of the muscles in the human body we are finally going to have a look at the anatomy of the arm.

The Anatomy of the Arm

Like I already mentioned above, you don’t have to learn all the names of the muscles you just have to know where they are and what they look like. I am only using the names here to make it easier for you to understand what muscle I am talking about.

We are going to start with a look at the bones.

It´s really only important, that you roughly know the forms of these bones. The bones will be covered almost completely by muscles later on but you will need to know how the bones are constructed in order to understand what the individual muscles actually attach to.

The bones in the image below are extremely simplified mainly because you don´t need to know the exact forms of every bone.

You are an artist, so you can simplify them you are not a doctor, who has to exactly know the whole anatomy of the human body. Keep that in mind!

Next up, we are going to look at the first few muslces of the arm.

These muscles are later on going to be covered up by other muscles, however especially the Brachialis can sometimes peak out when you, for example, flex the arm.

The Brachialis is not the biceps! The biceps is over the brachialis covering him almost completely!

You can see, that I drew a simplified form of the Brachialis next to it on the image above. That can help you to draw it easier.

The brachialis is really only seen when you flex your arm. So, when you are flexing take a close look on the outer side of your arm under your biceps. You may be able to see a little bulge there, that is the brachialis!

This muscle is one of the muscles, that is dictating the shae of the outer side of the lower arm.

It´s importand to at least know, that there is a muscle located there but this muscle is hardly ever seen.

There are a few muscles on the inside of the arm, that are partially responsible to move the hand in pretty much every direction.

I just called them all “felxors” because we don´t really need to know the name of each of these muscles individually. We only need to know their basic form, wich you can see above, and how they attach to the arm.

This will basically force the muscles to wrap around the lower arm. So if you turn your hand to face downwards you will actually be able to see these muscles wrapping around your arm.

Now we are finally getting to the famous biceps! The biceps is the most prominent muscle in the human arm.

The antagonist for the biceps is the triceps, which is located on the back side of the arm. We are going to meet this muscle later.

This muscle is wrapping around the lower arm similar to the supinator.

This muscle is very prominent and it dictates the form of the lower arm together with the pronator teres, flexor carpi radialis and the palmaris longus.

These three muscles are all on the inner side of the arm. They also dictate the shape of the lower arm together with the Brachioradialis.

The lower strand of the biceps is located between these muscles and the brachioradialis.

These muscles are responsible for the movement of our wrist. There are so many muscles, that work together here just to give us a huge moveability in our wrist.

The Arm [Back view]

Again, this is a simplified drawing of the human ribcage. but it is enough for us to understand how the anatomy of the arm works.

So lets take a look at the first few muscles of back of the arm.

The triceps has a very distinct form, that looks like a horseshoe on the lower part of the muscle, where it attaches to the bone.

If you straighten your arm and make a fist then you will be able to see the triceps on the back of your arm. Alternatively, you can also feel, where it is if you are not able to see it right away.

Now in the back view you can actually see where the Brachioradialis ataches and how it wrappes around the arm.

I grouped them together because you only need to know their general shape and how they are attached to the arm.

The Infraspinatus and the Teres Minor

These muscles are attached to the shoulder blade and they are responsible for the movement of the shoulder, at least partially.

you can only see these muscles when the person is very muscular or very skinny. But it is still important to know, that they exist and where they are.

And finally the deltoid. The deltoid has three major parts. All parts are attached to the collarbone or the shoulder blade on one end and they all come together on the top part of the upper arm on the other end.

The deltoid is the main muscle responsible for lifting the whole arm up.

One part of the muscle is on the back. It attaches to the shoulder blade and connects to the upper arm. It is partially covered by the second part of the deltoid.

The second part of the deltoid attaches to the side of the collarbone and wraps around to the front. This part covers both parts of the deltoid on one end.

The third part is attached to the collarbone on the front and is also partially covered by the second part of the deltoid.

In the image below you can see the deltoid a little better and how its three parts are attached to the collarbone and the shoulder blade.

As I mentioned above, the arm can be simplified into basic forms and then you can use your newly acquired knowledge of the anatomy of the arm to define its shape and make it look realistic.

The human arm can be simplified into four forms. These forms do look a little bit weird at first, but they will help you to understand the human arm a lot better.

The arm consists mostly of round forms or rounded squares but the wrist is actually very boxy. Keep that in mind, when you draw these forms!

Don´t use this trick to actually draw the arm, this is only meant as a little trick to help you memorice the forms.

Here are some examples to help you understand how the muscles dictate the forms of the human arm and how you can use shapes to define the muscles.

Also keep in mind, depending on how you move your arm different muscles will be flexed. This will make them bulge and you will be able to see them a lot better and that may also influence the general form of the arm a little bit.

The best example for this is the biceps. If you flex your biceps it will be seen very clearly but when you just relax your arm the biceps will stretch and you can’t see it as prominently as before.

This may sound weird but don’t draw every muscle individually all the time. If you do this your character will look stiff or weird even if they are anatomically correct.

Instead, you should draw a simple line of action for your character and then add the basic shapes to bock out the character. Then you should identify the muscle, that is most important for the action, that the character is performing.

Is he about to hit someone? Then his biceps is probably flexed in anticipation of the hit, that is about to come.

Is he gripping something very tightly or squeezing his hand? Then the flexors and extensors are going to bulge and the triceps will probably be visible.

Put special emphasis to those muscles and don´t draw the other muscles with too much detail.

Be Patient and don´t give up!

I know, that I say that a lot but my strong belief is, that everyone can learn how to draw if you just don´t give up!

2 thoughts on “How to Draw Arms. The Anatomy of the Human Arm for Artists.”