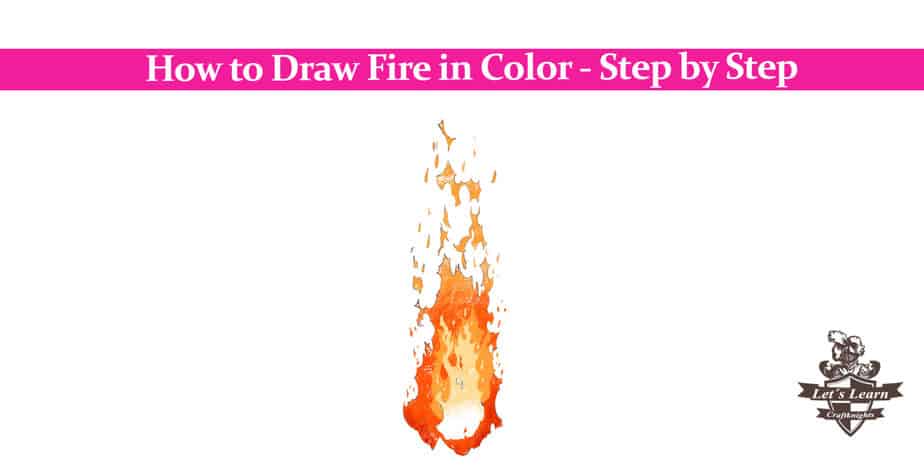 Drawing fire can be quite hard and frustrating because of its weird shapes and counterintuitive colors. It is also emitting light in a very specific kind of way, which makes it even harder to draw.

But don´t be discouraged in this guide I will break the progress and the form of fire down in easy to follow steps that you can follow along.

Before we start though, you will need the right tools.

So let´s get started.

I generally only suggest the tools, that you could use because, to be quite honest, it doesn’t really matter what tools you use.

Just use the drawing tools, that you are most comfortable with.

You will need pencils to draw the construction lines and the underdrawing with.

I usually use a graphite pen between HB to 6B.

It’s just important that you use a pen, that you can easily erase later on.

I used color pencils but you can use any medium, you like.

You could use watercolors, acrylic paint, or crayon.

Just be sure, that your paper can take the medium of your choosing.

For example don´t use watercolors or acrylic paint if your paper is regular sketching paper, that can´t take a wet medium.

The right paper depends on the type of color, you chose before.

If you chose a wet medium like watercolor or paint, then you should use a thicker paper.

If you want to color your drawing with pencils, as I did, then regular sketching paper will do.

But your paper should be white and not brownish for this drawing because the color effect, that we will create in this guide, will look better on full white paper.

And finally, you will need an eraser.

Any regular eraser will do but I would suggest using a kneadable eraser.

You will mainly use the eraser to soften up the guidelines so that you can go over them with color and a regular eraser can damage the paper underneath while a kneadable eraser won´t damage anything.

How to Draw a Fire in Color?

So let´s start with drawing our fire.

Try to look as straight at the piece of paper before you as possible to avoid as much perspective on your drawing surface as possible.

Try to understand the general forms of the fire. Look at fire and try to see if you can find any forms, that repeat a lot. Remember these shapes and use them in your drawing and you will find, that it will instantly look more like fire.

This tip is useful for every part of drawing in general, by the way.

Step 1: Drawing the Center of the Fire

We will start by drawing the very center of our enormous flame.

Take your graphite pencil and draw all the following lines, until we get to coloring, very light because you will erase most of them later on.

The center of the flame will, later on, be white.

Then from the half-circle, a lot of c-shaped lines go up and form the general shape of the core of the fire.

Next up we will add some c-shaped lines that go in the other direction than before to connect some of the lines from before.

And as you can see the core of our fire is already looking like fire.

Finally, let´s add some details to our little flame-core. A few shapes, that mirror the outlines of the flame, in the top part of the flame will give the flame a little more life.

Part 2: Let´s Draw The Middle Part of the Flame

Next up let´s add another shape that is pretty similar to the precious shape behind our flame core and little further up.

I drew this shape the exact same way as I drew the core of our flame in the previous step.

And as our final shape for the middle part of the flame, we will add another bigger shape behind the two shapes, that we already have.

As you can see, the lines are getting very chaotic in the top part of the flame but that is intentional.

And in order to give this illusion of movement in our drawing, we will make the top part of our flames very rough and chaotic looking with lots of extreme looking flame-like shapes.

Step 3: The Edge of Our Flame

The edge of our fire is the biggest shape in this drawing.

It almost surrounds the whole middle and core part of the fire and as you can see it kind of dissolves in the top part into smaller shapes.

The further up you place these shapes the smaller they will get. This will give the illusion of movement.

Before we get to the coloring phase you need to lighten your previous lines a little, so that they don´t show through your color layers.

So either slightly erase the lines until you can barely see them or use the kneadable eraser and rollover your drawing to lighten up the lines.

Next up you need to pick the colors, that you want to color your drawing with.

I colored this drawing with colored pencils but you can also use watercolors. If you want to know how to approach this coloring with watercolors, then take a look at my guide on drawing a flamingo, where I use watercolors. But the approach is very similar.

I chose four colors for this drawing.

A very light yellow color for the core of the fire.

The further we move out of the center of the fire and the closer we get to the edge the redder the color of the fire gets.

So next up I choose a red color that is still a little bit orangy.

Then I picked two more colors that are in-between the two first colors, that I picked.

Let´s start with the core of the fire. We will let the bottom part of the center of the fire blank and only color in the top part with the lightest color, that we just picked.

Next up we will fill in the middle part of our fire with the next darker color.

Be careful to leaf the right areas blank as you can see below in the image.

Finally, we will use the most saturated color to fill in the bottom part of the edge-shape of our flame.

But this time we will slowly transition from the dark red color to the orange color. This little effect will give the fire an extra bit of realism.

And with this, we are done!

Fire is not easy to draw but once you get the hang of it and once you understand the forms of the fire then you will be able to draw believable fire.

There are a few more things, we could add like some smoke or dark background to make the fire look brighter.

If you liked this guide then you can have a look at a few of my other guides like drawing realistic mountains or how to draw a realistic tree.

If you liked this guide or if you have any questions, then leave me a commend or write me an e-mail!