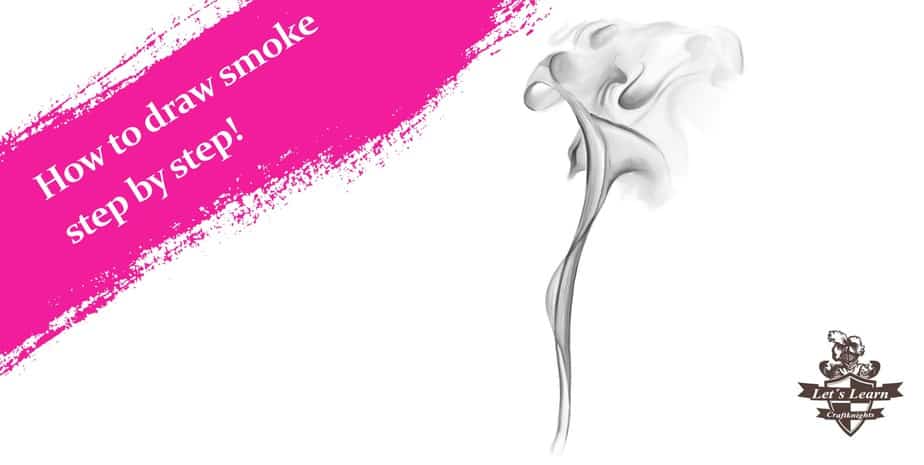 Drawing smoke is something that is weirdly hard to do but the moment, you understand how smoke moves and what shapes it forms you will find, that it is actually pretty easy to do. But before we start let’s take a look at the tools, that you need to draw smoke.

What Tools Do you Need for This guide?

You only need a soft graphite pen, that lets you achieve a huge range of value from very dark to very light. You will need an eraser, I personally love to use a kneadable eraser because it is very clean when you use it but you can really use any eraser, that you have at hand.

For this guide, you will also need something to blend the graphite, for , some soft paper (toilet paper) or you could just use your finger (I it though).

And finally, you need a surface to draw on, any thicker paper will do the trick but I recommend regular drawing or sketching paper. That’s about all you need, so let´s start drawing some smoke!

Let´s Learn How to Draw Smoke!

Smoke from a big fire will look very different from smoke from a small ember.

The kind of smoke, that we will draw in this guide is smoke, that you will usually see coming from a cigarette.

Next up just very lightly shade in the whole shape. Keep it light and don´t worry about any details yet.

Now start by adding some darker shades in the relevant places. Don´t overdo it and don’t go too dark! I also darkened up the edges of the lower half of the .

Be careful not to draw the edges too dark in the top half because the smoke is starting to lighten up so the edges will fade as well. Always keep this in mind!

Normally I don’t like to smudge my drawings. If you never learned how to render a form with lines, then don’t try and render it by smudging your lines.

This being said, when it comes to smoke, you can’t really go that wrong with smudging, as long as you don’t overdo it! So in this step, I softened up the shades but I was careful not to destroy the clear outline in the bottom part f the drawing.

In the top part, where the smoke starts to fade out, I deliberately chose to soften the outlines, so that the effect of the fading smoke would come to life.

Finally go back over some of the parts with your pen, to get some texture back. Especially in the lower part of the smoke pillar.

In the end, you can also darken some parts of the drawing in order to get a little bit more contrast. But be careful, as always the best effects are the carefully placed ones!

As Always Don´t Give Up!

That´s about it with drawing smoke. The most important thing to watch out for, when you draw smoke, is the overall shape and the way, that very shape dissolves and fades in the top part.

When you can do that, then you can draw smoke! And as always, as long as you don’t give up drawing and you keep on exercising, then you will learn how to draw. That is a guarantee!

If you liked this guide then feel free to check out my other guides on drawing realistic mountains or how to draw a tree.

I also have a very detailed guide on drawing roses.

So keep on drawing and until next time.

3 thoughts on “How to draw Smoke?”