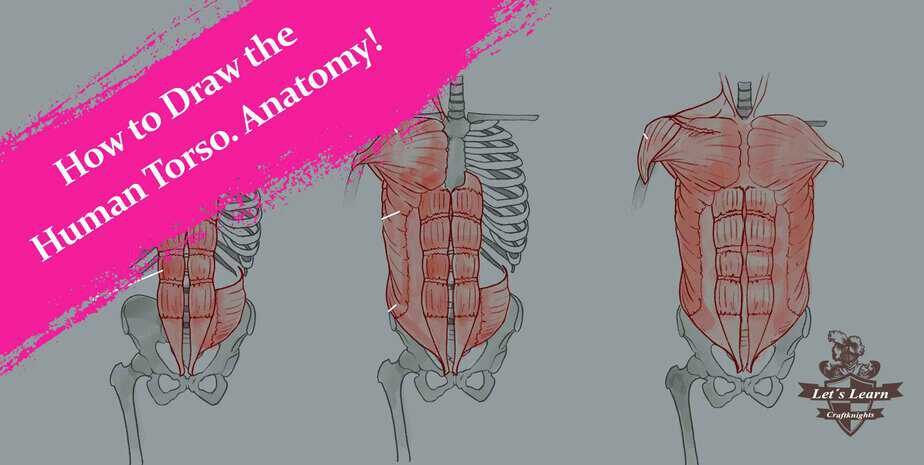 In this guide, I will show you the anatomy of the human torso and I will teach you how to draw the torso in every angle. I will also show you some tips and tricks, that will help you with drawing the torso correctly in perspective! So let’s get started!

The Muscles of the Torso

So we are going to start with the muscles of the human torso.

I will quickly go over them and then I will show you some tips and tricks, that will help you memorize some of the muscles and the forms of the muscles.

Important, you don´t have to know the names of the individual muscles! I have only displayed them here so that you have an easier time knowing what muscle I am talking about.

You only have to know where the muscles are, how they attach to each other and what forms they have. Nothing more!

Muscles of the front side of the Torso.

We are going to start with the front side of the torso.

The rectus abdominis is the muscle you usually train to get a six-pack. The muscle has, however, actually eight segments, that can in some rare cases be seen through the skin.

So theoretically it is actually possible to get an eight pack.

The pectoralis major is slightly covering the rectus abdominis on the very top part of it. The pectoralis major has a few individual “strings” of muscles, that are layered over each other on one side and attach to different parts of the skeleton on the other side.

One side of the pectoralis major attaches to the upper arm of the skeleton and the other side attaches to the color bone, the middle of the ribcage and the fourth and fifth rip from the top.

And finally the deltoid! The deltoid consists of three muscles, that attach to the collarbone on one side and on the upper arm on the other side. The deltoid slightly covers the pectoralis major.

And that’s really it for the front side of the torso! There are obviously a lot more muscles, that are present in the torso but these muscles, that I just went over, are really the most important ones for drawing the torso. At least for the beginning.

The Muscles of the Back

You will quickly realize, that we already know some of these muscles from the previous part. That is because some of the muscles of the torso are wrapping around the body. so don´t be confused!

First of all, let’s have another look at the deltoid but this time from behind. Here you can see, that the deltoid is also attached to the shoulder blade.

Or to be more specific, the deltoid is attached to the part of the shoulder blade, that is going up over the ribcage and that part will attach to the collarbone in the front.

Next up the latissimus dorsi. This muscle is one of the largest in the human body but it is also the thinnest. it is so thin, that you can see some of the muscles, that are underneath it, though. It attaches to the spine and goes all the way around the skeleton and attaches under the armpit.

You can see a little bit of the external oblique in the back. This muscle also wraps around the skeleton.

The most important muscle of the back is the trapezius muscle. This muscle attaches along the spine all the way up to the skull. It also attaches to the top part of the shoulder blade and to the collarbone.

The trapezius muscle dictates the complete neck form of the back and the shoulder form.

Simplifying the Form of the Torso

It is obviously easier to simplify the whole drawing process and not always draw the skeleton first and then attach all the different muscles to it.

The ribcage can be simplified by drawing a simple elongated cube. A proximity 2/3 the way down will be the solar plexus.

The spine, that connects the ribcage and the hip can just be drawn as a simple cylinder.

The pelvice can also be simplified by drawing a cube.

It is a good exercise to just draw a lot of these simplified versions of the torso to get a feeling for the dimensions.

You can also take a look at different pictures of people running, jumping or people that just strike interesting poses and try to use these images as reference for drawing some of these simplified torsos.

The forms of the Muscles

Every single muscle in the human body has volume. Don´t forget that and always keep that in mind when you draw a figure.

But even though the muscles are twisting and stretching they still have volume! Don´t forget that! It seems like a little detail but it is very important to give your drawings that little final bit of believability!

As you can see above, I did not add any shadow and the figure still looks three dimensional and believable. That is because the forms of the muscles are defined by the lines in the drawing.

Don´t be to hard to yourself!

This may be the most important tip here. Don´t be to hart to yourself. You should be looking at your drawings and ask yourself, what you could be doing better but you should not beat yourself up over it.

Don´t demotivate yourself! and don´t give up!

Try to draw Forms and not Lines.

This may sound a little bit weird to you but let me explain.

What I mean by that is you should keep in mind, that in the real world no actual lines exist. Think of every drawing you do as if it consists of forms and shapes. This will actually help you to understand objects and people in a three-dimensional space way better.

As I said, it sounds weird but this actually helps. Just try to see the shadow planes and light shapes in every drawing, you do and draw these shapes and not the lines, that separate them. You will see the difference!

This guide is not meant as an in-depth complete guide to help you learn anatomy in all its integrity. There is a lot more to drawing and understanding anatomy!

This guide is only meant to help newcomers to learn the first few very basics to get you started with anatomy.

But there are a lot of little things, that you still have to understand and learn in order to get really good at drawing human anatomy. Things like how muscles change their forms, when they are flexed or stretched and what muscle moves which part of the body and so on.

But don´t get intimidated and just keep on learning! You can do it!