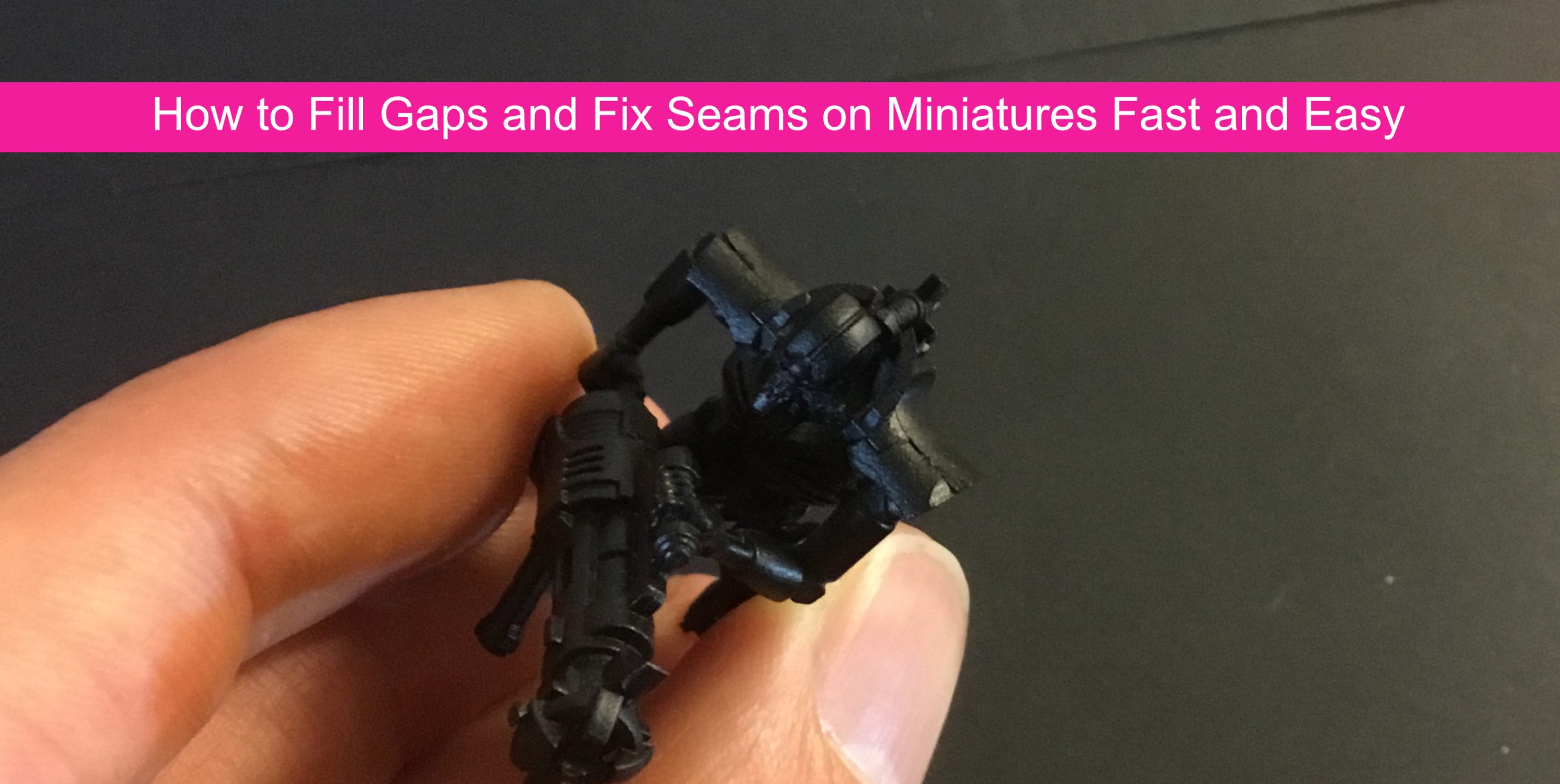 When assembling a miniature you will almost always have some gaps that need to be filled or some seams or molding lines that have to be fixed. It can be tedious and annoying to fix those small imperfections but it doesn´t have to be. In this article, I will show you the fastest and best methods to fix those imperfections so that you can get to painting the miniature faster.

Gaps and seams on miniatures can be fixed by using model glue, Green Stuff (or other kneadable two-part epoxies), sprue goo (which is made by dissolving model sprues in model glue), or by using a model knife to remove seams on the miniatures. The surface can be sanded afterward for a smooth finish.

In the following sections, I will go into more detail about how to best fix small and big gaps as well as how to remove seams and mold lines on miniature models.

I will also explain how to make sprue glue and how to properly use Green Stuff and other two-part epoxies.

How to Fill Big Gaps On a Miniature

Even though it doesn´t happen often it is always annoying when you glue two parts of a model together only to see that there is a big gap in one area that you can´t get rid of no matter how well you align the two halves.

As a whole, to remove big gaps on a miniature it is best to either use sprue goo or kneadable two-part epoxies like Milliput or Green Stuff. Apply the glue of your choice to the gap and let it harden. Then use fine-grit sandpaper to smooth the surface.

That is the basic approach but I will explain the whole procedure of fixing big gaps in more detail now.

You can buy two-part epoxies at your local hardware store but I highly recommend using Green Stuff as it has a longer work time and is easier to portion than most other kneadable two-part epoxies.

You can buy Green Stuff right here on Amazon.

Milliput is an alternative to Green Stuff that works just as well and is a little cheaper. It works exactly like Green Stuff but it is a little harder to smooth in my experience.

You can buy Milliput right here on Amazon.

It doesn´t matter which one you use the approach for both is the same.

Mix the two-part epoxy of your choice in a one-to-one ratio (make sure you wear gloves when working with epoxy!) and knead it until it is mixed completely. The two parts of the epoxy are often differently colored so that you can see when they are fully mixed.

Green Stuff for example is yellow and blue and it will turn green once you have mixed the two components well enough.

Now carefully apply the mixed epoxy to the gap and make sure that you fill the whole gap with it.

It doesn’t have to be perfect yet!

Let the glue harden for a couple of hours. It should be as hard as a rock now.

And you are done, you fixed a gap in your miniature using two-part kneadable epoxy.

You can also use so-called sprue goo to fix big gaps in your miniature but you have to make that yourself.

To make sprue goo you simply have to submerge some leftover sprues from your miniatures in some model glue and leave it in a closed jar for a couple of hours.

The glue will dissolve the sprues and you will end up with a thick paste called sprue goo.

You can use plastic cement glue from Tamiya that you can get right here on Amazon to dissolve sprues or simply some model glue from your local hardware store although they tend to be more expensive.

If you want a detailed guide on how to make sprue goo consider reading my article about making sprue goo at home.

You can apply the sprue goo with a piece of wood or an old brush that you don´t need anymore.

Use the sprue goo to fill in any gaps and try to smooth it as best as you can. It doesn´t have to be perfect as you can smooth the surface after it has hardened with some fine-grit sandpaper.

I highly recommend wearing a protective mask when working with sprue goo because the fumes are very aggressive!

How to Fill Small Gaps On a Miniature

Small gaps happen quite often when assembling miniatures but they can luckily be fixed very easily as well.

To fix small gaps on miniatures simply apply some model glue or plastic cement to the surface to dissolve the area where the gap is. This will “weld” the two parts together thus removing the small gap. Green Stuff or sprue goo can also be used to fix small gaps.

I personally prefer using simple model glue to fix these small gaps and only use Green Stuff or sprue goo when model glue didn´t work.

The model glue will melt the plastic that it was applied to which we can use to fix small gaps on miniatures.

Simply apply the model glue directly to the small gap and wait for a few seconds. Then use an old brush and gently brush over the area.

You will see that the plastic in the area will move and fill in the gap. Try not to apply too much glue, just one or two drops are usually more than enough.

Once the glue has dried the area will be rigid again and you can use some sandpaper to further smooth the area if necessary.

How to Fix Seams on a Miniature

Most parts of a miniature will have seams or molding lines that are leftover from the manufacturing process and need to be removed.

To fix seams and molding lines on miniatures simply use a craft knife to scrape the mold lines away. Hold the knife vertically to the miniature and repeatedly scratch over the molding line with moderate pressure until the mold line is completely gone.

The surface can be sanded with some fine-grit sandpaper afterward to smooth it.

This is a somewhat tedious process but it is well worth it.

If you don´t remove the mold lines on your miniature models and simply prime and paint the model then you will end up with ugly lines all over your model.

This is because the paint will catch on these lines and highlight them making them even more visible than before.

Should I Glue Push-Fit Miniatures?

Push-fit miniatures may sound like a very good idea and almost revolutionary at first but I personally dislike them.

I personally don´t like push-fit miniatures and always recommend simply snapping the pins of the two push-fit parts off and gluing the parts instead.

That is mainly because the push-fit parts often leave quite a big gap between the pieces and the parts often need a lot of force to push them together which can sometimes cause them to break.