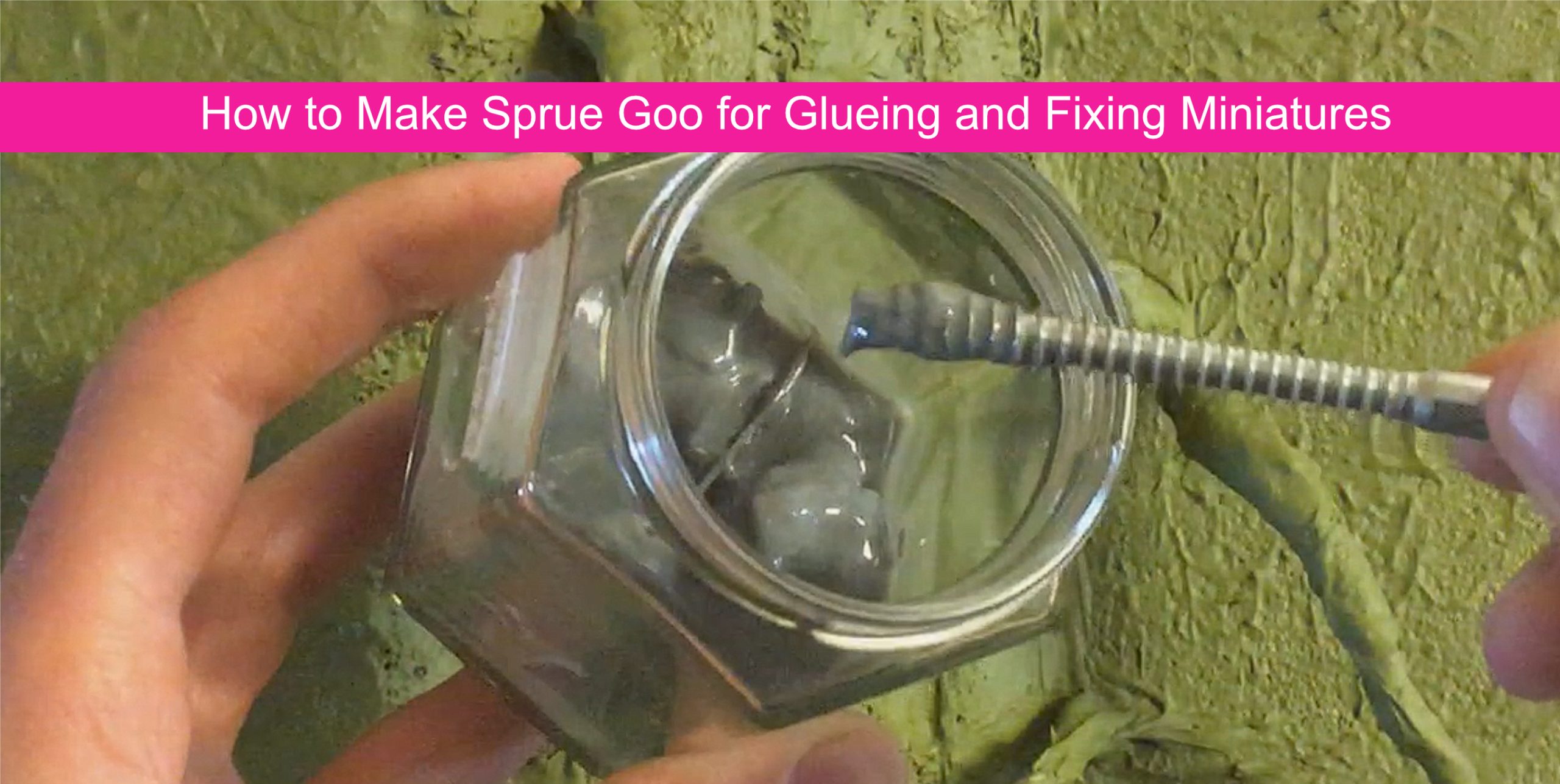 You might have heard Warhammer players or miniature enthusiasts talking about sprue goo and how they use it to glue their miniatures and fix seams or holes in their miniatures. Sprue goo is a very cheap alternative to green stuff but what is it exactly and how do you make it?

As a whole, sprue goo is made by mixing small pieces of the sprue (the thing that miniatures are attached to when they are bought) and model glue or plastic cement together. The model glue will dissolve the plastic sprue creating sprue goo that can be used to glue miniatures or to fix seams and holes.

This is only a very basic description of how to make sprue goo but I will explain the whole process in much more detail in the next section.

How to Make Sprue Goo

Let´s have a look at how to properly make sprue goo as well as how to use it correctly.

And, if you want to know how to use sprue goo to fix seams on miniatures, then consider reading my guide on fixing seams and gaps on miniatures right here.

Firstly, let’s take a look at the materials that you need to make sprue goo. It is a very short list but makes sure that you get the right materials otherwise, it won´t work.

You will need the following:

Usually, you only have to buy plastic cement.

You will have some sprues lying around for sure if you have miniatures and you can use an old jam glass, for example, for storing the sprue goo.

Making the sprue goo is rather easy.

Simply cut some sprues into small pieces and put them into the airtight glass.

Once you feel like you have enough just add the plastic cement until all of the sprue pieces are submerged in the glue.

You can always add more plastic cement later if you don´t like the viscosity of your sprue goo.

Then finally, close the lid of the glass container and let the mixture sit for a few hours until the sprue pieces have dissolved.

It usually only takes around 2 hours until all of the sprue pieces are dissolved and the sprue goo is done but it can take longer than that depending on the room temperature, the kind of plastic cement you used, and how thick the sprue pieces were.

How to Use Sprue Goo

Now that you have made your very own sprue goo you surely want to know how to use it, right?

Sprue goo can be used for gluing miniatures, filling gaps and seams, or for adding effects like rot or rust to the miniature. Sprue goo can be sanded and should be primed before applying any paint to it.

Be careful when using your sprue goo as it will create strong and potentially harmful fumes when you use it. So I would recommend wearing a protective mask or only using the sprue goo in well-ventilated areas or outside.

When I fill in gaps or fix seams with sprue goo I usually use wooden stirring sticks to apply the goo to the area where the gap is. Then I try to smooth the goo as much as possible before leaving it to cure.

After it has fully cured I usually use some sandpaper or files to smooth the area further.

Sprue goo can also be used to glue miniature pieces together but I only recommend using sprue goo for this kind of thing when the pieces don´t contact properly. For flush sitting fittings using sprue goo would be counterproductive and simply plastic cement should be used instead.

You have to apply a primer to the area where you used the sprue goo as well or otherwise, the paint won´t adhere properly.

Why Use Sprue Goo?

You might have heard that sprue goo isn´t all that great to use for fixing gaps or gluing miniatures because it is kind of annoying to apply and it needs quite some work to make it smooth compared to using something like green stuff.

And that is absolutely correct. Using green stuff is easier and faster but also much more expencive.