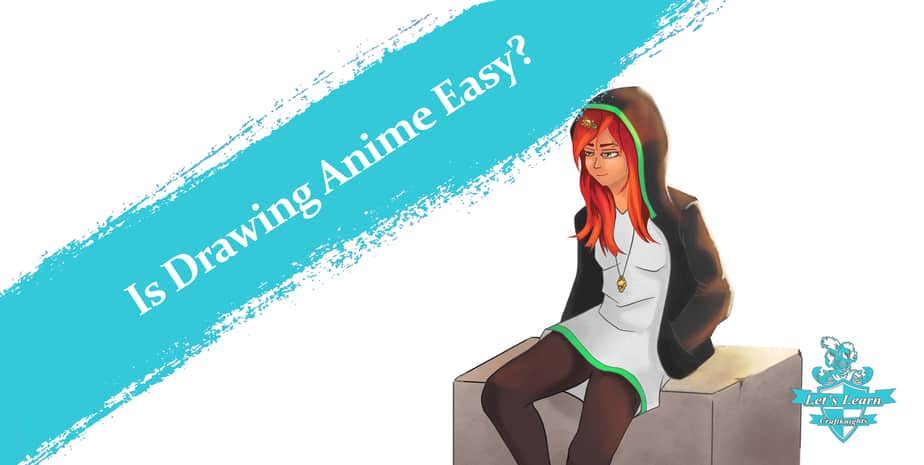 So I have been asked this question a lot whenever someone was looking at my art. For some reason, a lot of people will automatically assume, that because it is “just” anime that it is easy to draw. Apparently it looks easy enough to draw.

But is Anime easy to draw? The short answer is: No, it isn´t easy to draw! Drawing Anime requires very similar knowledge than drawing realistically. You will have to know basic anatomy, you need to be able to render properly and understand perspective as well as how light and shadow work. Anime is an abstraction of reality and as such sometimes even harder to draw than a realistic picture.

Why do People Think, that Drawing Anime is Easy?

Anime is a very specific art style, that draws focus to the face (especially the eyes) to effectively show emotion. So the highest detail (most of the time) is the face. The rest is drawn very simplistically. But simplistic does not mean that it is easy to draw!

Unfortunately, a lot of people think, that because Anime is abstract and simplified in so many areas, that it is easy to draw.

A lot of Anime styles, for example, only draw a simple line in place of the mouth and only draw a little shadow of the nose instead of a realistic nose and more.

But you still have to know where the nose is sitting on a face to draw a believable shadow and the same goes for the mouth.

And even though you aren’t drawing extremely realistic lightning in Anime drawings you sill have to know how light works, how the color changes when it hits different surfaces and how the shadow is cast in order to make something look believable.

So even though a lot of things are simplified in Anime, it does not mean Anime is easy to draw! You will have to know the same fundamentals and on top of that, you have to learn how to abstractly draw the reality in a believable way.

So in some ways drawing anime is maybe even harder than fine art, where you sometimes only copy reality.

But if you are one of the people who think, that anime is easy to draw then why not try and follow a guide on how to draw some anime eyes and then you can see where you end up and how hard it really is.

What Fundamentals do I Need to Learn to Draw Anime?

If you want to learn how to draw Anime, you have to learn the fundamentals.

But don´t worry, even though it may sound like a lot to learn, you don´t have to master all of them. A basic understanding is enough to start out. The rest will come with time and practice!

You can also check out these tips on how to improve your anime drawings.

So what fundamentals do you have to learn, when you want to draw Anime?

Anatomy is an absolute must. No matter how much you want to avoid learning it, if you want to be able to draw believable characters, you have to at least learn the basics of anatomy.

That being said, you don´t have to learn every single muscle in the human body, you only have to know the muscles, that are seen on the surface of the skin.

So Perspective is important when you want to draw landscapes or backgrounds. But even if you are only drawing characters, you should still have a very basic understanding of how perspective works and how we perceive it.

The basic idea of drawing in the first place is creating the illusion a three-dimensional object on a two-dimensional surface (the drawing surface). And knowing how Perspective works will help you create that illusion.

And Perspective is so much more than just a one-point or two-point perspective grid!

Color theory is a very broad subject. It is important if you want to draw amazing looking compositions, so you should definitely at least look into it!

The most important areas of color theory are Saturation, Value, contrast and how warm and cold colors behave.

This is closely related to color theory but also with perspective and forms. You have to understand how forms cast different shadows and how bounce-light affects these forms.

You also need to know how the color changes when it is in shadow and much much more.

Right after anatomy not understand values is the most common beginner’s mistake. Values will help you to distinguish different forms from one another and especially in environment designs it will help you to show depth.

If you convert a colored drawing into black and white you should still be able to see all the details like before. If the details vanish, however, you probably did a poor job on the values.

If your drawings don’t look interesting or eye-catching enough then you probably should look into compositional rules. These rules are in no means absolute but they tend to help in the beginning.

But not only the rule of thirds is important, but form-language and guided lines are also important. Especially if you want to illustrate characters!

Don’t underestimate the power of composition!

No, drawing anime digitally is not easy. It requires almost the same skill as drawing it traditionally. You have some advantages when you are drawing anime digitally, like the ability to reverse anything and to adapt scale and place freely at any time. But you still have to know all the basic fundamentals in order to create a believable drawing or illustration.

You also have to learn how the programs, that you are drawing in, work and how to use layers and brushes correctly. So in some way, it might even be a little bit harder.

Why You May Be Struggling with Drawing Anime.

So if you are struggling with drawing Anime, then you should honestly ask yourself this question: “Did I learn the fundamentals or did I skip them?”

If your answer is “I skipped them” then you should go back and learn the fundamentals. I know, that they tend to be very technical and might even be boring in some areas, but if you learn them your ability as an artist will improve by a lot.

Like it’s not even funny how much you will improve after you have learned them! So go back and learn the fundamentals! I did it so you can do it as well!

If your answer is “I learned them” then you either just need a little more exercise or you are simply too hard to yourself. Don´t compare yourself to all the pros out there!

They have years and years of experience in their field, so obviously you can´t learn how to draw like them in a short time. You still have to practice. But I promise you, if you practice and if you don’t give up, you will get there and you will draw like a pro!