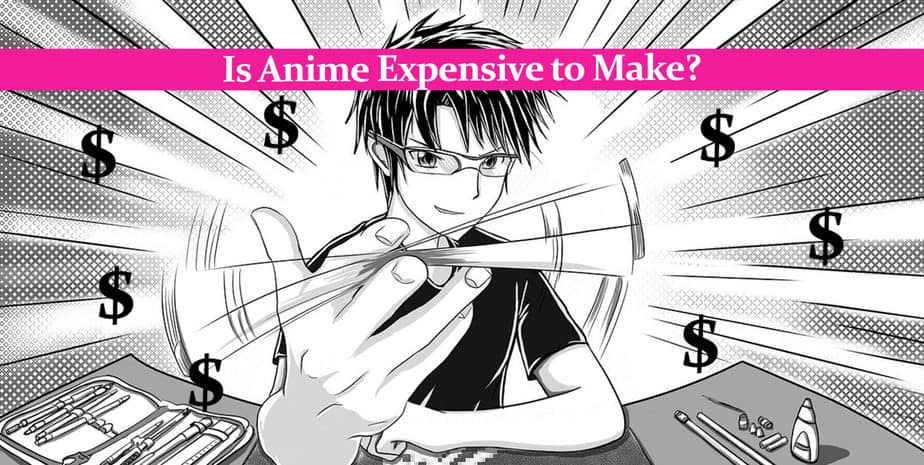 When you look at an Anime you, most of the time, will probably think, that it isn´t as expensive as other Animations like 3D rendered Animations or very detailed other 2D Animations. And while that may be true it still isn´t cheap to make an Anime.

Why is Animation so expensive to make?

Creating animations is expensive because there is a lot of work going into creating it. Even if it is a very Simple Animation it still needs a lot of work.

Anime already is one of the more cheaper variations of Animation, because it is comparably simple in style. Anime was invented because of the high Animation costs and was specially developed to cost less. If you want to know more about how Anime came to be, you can check out my article on the history and Origin of Anime here.

If you are worried about anime needing to be from japan then don´t be, there are actually non-japanese animes out there. So Animes can be made in American for example.

But let´s take a very rough and simplified look at how Animators work and how long it takes to only create 60 seconds of Animation.

First of, is the concept phase

In this Phase, the Animators will draw concepts to the characters.

They will do little test Animations and work out how the characters move. Then they will start to conceptualize the backgrounds, lighting, and style of Animation.

In this phase, they will also settle on an overall mood and color to match the story. This phase is the most creative and also the one phase where most Projects just straight out die.

If the Project survived the first Phase then the Animators will go to the second Phase.

The Storyboard phase. In this phase the action, the “Movie sets”, the cuts and the composition of the whole story will be drawn out as a reference for every Animation. In this Phase, the backgrounds and “Sets” where the story takes place, will also be developed and drawn for later reference.

In this phase finally, the actual Animations will be created. First of the keyframes will be created by the leading artists. These are drawings, that show the action and movement with huge gaps in between them.

The missing animation frames in between these keyframes will then be drawn each individually by a lot of animators.

There are between 24 and 31 frames in one second of an Anime. And each and every one of these frames has to be drawn at least partially! This is where most of the work lies and this phase of the Animation Project is the most time consuming and most expensive part of creating an Animation.

The final phase of creating an Anime! In the final phase, all the animated scenes are being cut together, color corrected and final details and effects, as well as the music and voice-overs, will be added.

By the way, Music and Dubbing the Animation is also a huge cost point in creating an Anime. Almost every Anime has original Music and every single Anime needs voices for their characters, obviously.

In Japan and other countries as well, there are people who do voices for Animation as their career and these professionals are not cheap!

So all this work goes into creating every minute of every Anime and depending on the studio creating only 60 seconds of Animation can take anywhere between three weeks and up to two months!

I hope, you got a little bit of an idea of how much work actually goes into making pretty much any Animation. It is a lot and this is the obvious reason why creating an Animation and why creating Anime is so expensive!

What was the most expensive Anime ever made?

According to the Guinness World Records the most expensive Anime ever created had a budget of 20 Million US Dollars. You can find the official entry on the Guinness world records page here.

The Name of the Anime is “Steamboy” by Katsuhiro Otomo’s. It was released in 2004 and was over 10 years in development.

However, according to Wikipedia the Anime-Movie “The Tale of the Princess Kaguya” made by Studio Ghibli had a Budget of 49.3 Million US Dollars. With is more than double the Budget of Steamboy. You can find the Wikipedia article here.

So these are the two most expensive Animes I could personally find. But as you can see, the prices for creating high-quality Animations are very high!

How Big is the Anime industry in Japan?

I have been to Japan and even if you tried you wouldn´t be able to ignore the influence, that Anime has on Japan.

Everywhere you go, you can see Anime characters selling you products like models, Animes inviting you into a shop, Manga stores, Gaming stores that are overflown by Anime imagery and so much more. In the inner city of Tokyo Anime is literally everywhere.

The Anime Market in Japan is booming since the late 1990s and there is no sign that it is stopping anytime soon. More Animes are being produced than ever before and in Japan, it has become a new dream job to work in the Animation industry.

So how big is the Anime Industry in Japan? Pretty much exactly as big as the Film industry in the USA!

With what do Anime Studios make the most Money.

This is a complicated question to answer. But one thing is sure, they don´t make a lot of money off the Anime airing on television or on any streaming service!

One big money maker for the Anime Industry is selling DVDs of their shows but it isn´t really the biggest income they have.

I don´t have exact Numbers here but I am going to say, that the most money, like with other American IP´s, is coming from the merchandise. So selling figures, prints and other officially licensed products from the Anime. The money made from merchandise can easily go into the millions, depending on how successful the Anime is.

Is it worth it to make your own Anime?

Well, you heard how time-intensive and complicated it is to make an Anime and also how expensive it is to make one. I personally would say: no, it isn´t!

I would stick to just drawing my own Anime illustrations. If you have a story, that you would like to share with the world, then you should start a webcomic or web manga.

It is way less complicated to do and publish than an actual Animated television show or Movie and you can build an audience that way. And who knows, maybe someone will stumble over it and decide to make an Anime TV series out of it.

That is the exact same way, that “One Punch Man” Started out!

Will Anime die because of the high costs?

No, it won´t! Don’t worry, Anime cost a lot of money to make but why do you thing Animation studios still create them today?

They are actually creating and releasing more Animes now than ever. Because even though they cost a lot of money, they also bring in a lot of profit! The Anime-Industry is huge in Japan and in a lot of western countries as well.

So Anime won´t die that fast. In fact, I think the Anime Industry is going to grow even more especially in other parts of the world!

Hi, I am a passionate maker and professional prop maker for the entertainment industry. I use my woodworking, programming, electronics, and illustration know-how to create these interactive props. And I share my knowledge and my experience on this blog with you so that you can become a maker yourself.