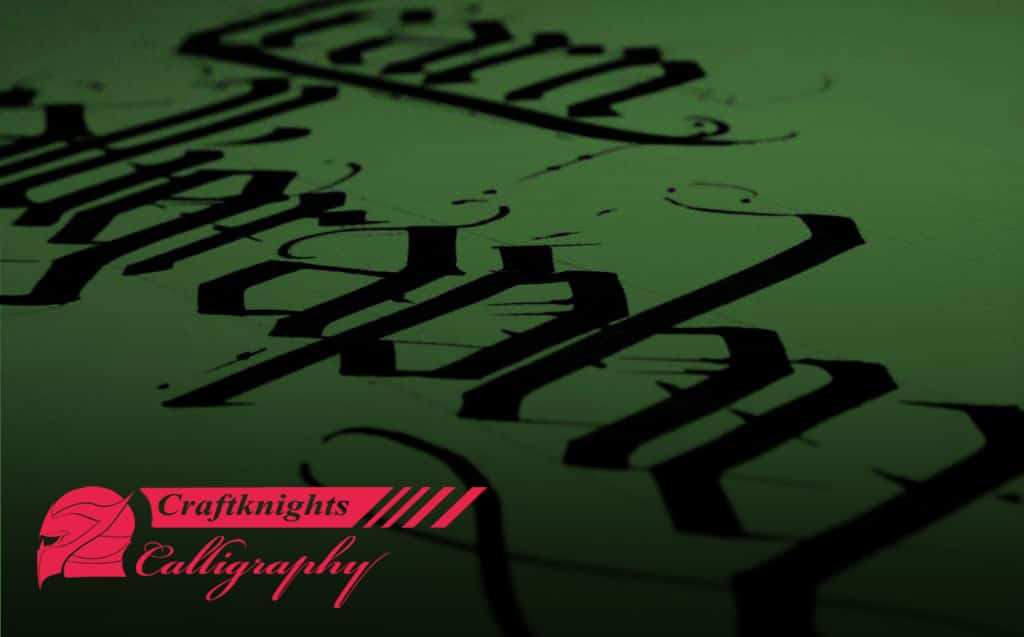 Is calligraphy art? The short answer is yes, it can be art! Calligraphy can be an art form, depending on what you use it for. If Calligraphy is used with the intention of invoking an emotional feeling or just meant to look beautiful even if you can’t read what was written, then calligraphy is per definition indeed art.

The Definition of art is:

“The expression or application of human creative skill and imagination, typically in a visual form such as painting or sculpture, producing works to be appreciated primarily for their beauty or emotional power. “ Oxford Dictionary

So if we look at the first part of the definition then calligraphy would be defined as art. Calligraphy is an application of human creative skill and imagination and it is expressed in visual form.

But if we look at the second part of the definition it gets a bit more tricky. Because calligraphy is essentially still writing so it is not really produced with the intent to be appreciated primarily for the beauty or emotional power.

Not always anyway. If you are addressing an envelope with beautiful calligraphy it still has the intent to be readable so the address can be read and the letter can be sent to the right destination.

In this case, calligraphy is per definition, not really an art.

But if you write calligraphy on a piece of wood with a lot of flourishes and beautiful composition to give the reader an emotional reaction. Then it would be per definition art.

So when we go by definition Calligraphy is art, depending on how you use it.

The Definition of calligraphy has changed over the years. The original meaning of calligraphy comes from the Greek word “Kallos”, meaning “Beauty” and “Graphy” which is a style or method of writing but it can also be translated as “Drawing” or “Writing”.

So Calligraphy translated means “Beautiful Handwriting”. Nowadays however calligraphy is a little harder to describe correctly.

A lot of people confuse calligraphy with hand lettering but they are not the same. Calligraphy is more a craft, where the height of the letters and the proportions, as well as the shape and form of the letters, are very carefully constructed. Every letter will interact with another letter in a specific way. Hand lettering is more like written typography.

So calligraphy is a craft and with every craft, you can use it for artistic purposes.

What is calligraphy used for?

The use of calligraphy has changed in the hundreds and hundreds of years it has been around now. The use and general meaning of calligraphy also depending on the culture. I will primarily talk about the use in the western culture here, however.

In the early Middle Ages, there was no way of replicating a Book other than copying it by hand because printing wasn´t invented until the late middle ages.

Most of the books were written in gothic style scripts or Carolingian muscles. Almost all the books written at the time were related to the Bible or similar religious texts.

Letters were only written by nobles because the general public could not read back then.

Common at the time where big illustrated capital letters at the beginning of every or most paragraphs or sites so-called Initials or drop caps. Generally, a lot of books were carefully illustrated in the middle ages, most of the time with geometric decorations or colorful figures.

When writing became more and more accessible to the general public and writing changed from something nobles and the church did for religion or politics to another type of general communication between people, like writing generic notes or letters for one another.

The cursive scripts began to get popular. Cursive fonts were developed to make writing faster and people began to move away from illustrations and Initals. The English script began to become more and more popular, it spread through Europe because of English book being published throughout the then known world.

If you are about calligraphy now and you want to learn the art of calligraphy or just want to see how calligraphy is done and all the tools that are used then you can check out my beginners guide to calligraphy here!