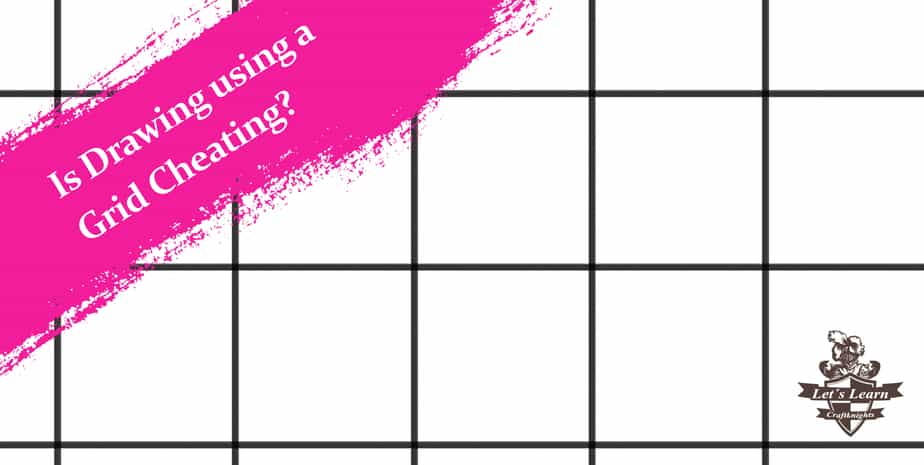 I have never really used the Grid method for drawing and the reason why is way different, then you may think.

So is drawing using a Grid cheating? No, it is not. Nothing in art is really cheating, there are just tools you are free to use. But it is also not good to rely on drawing with the grid method because you are relying on the grid instead of your eyes. So when you are trying to draw from your Imagination and you are used to the grid method, then you will have a hard time.

Why the grid method is not good for practicing drawing.

This means you will never quite understand how this subject is positioned in a three-dimensional space. But understanding exactly that is crucial to improve. Because if you learn how perspective works and how lights and shadows behave instead of just copying it with the help of a grid, then you will be able to draw it from your imagination eventually with enough practice.

Using a Grid will only lead to an exact copy of the thing you want to draw. It is very similar to tracing in a way. So you will end up with an accurate drawing that will look good but that is really all that you will end up with. You won´t learn anything by using the grid method.

Also, the grid method will fail you once the forms of the drawing get more integrate and complex. When you try to draw a rose with this method, for example, you will struggle to get all the fine detail in the middle of the rose right.

What kinds of methods are good when practicing?

There are a ton of methods out there for learning how to draw a specific subject or object. Generally, every method, that lets you deconstruct the object, that you want to draw, are good for practicing. Mainly because you have to understand the object in order to deconstruct it properly.

The best-known method is probably the geometric forms method. Where you deconstruct an object to its most basic geometric forms. And then you add more and more integrity and smaller forms until the object is build up.

This specific method will help you understand the object and the three-dimensional plane it’s on. And eventually, you will be able to construct any form you want from your imagination. With enough exercising that is.

For drawing the human figure there are a lot of methods as well. One would be the Lumes method. For example, the famous Lumes head shows how you can deconstruct a human head with simple geometric forms accurately. And then based on these forms you can add details to draw the human head from any angle and from your imagination. Something you won´t be able to do with the Grid method.

When should I use the Grid method?

That being said there are instances where you can use the Grid method and it is actually useful.

For example, if you have to draw an extremely accurate copy of an object or subject. The Grid method is insanely good at copying exactly the thing you want. But it is harder to do from life so you will mostly use it from pictures.

But at the same time, all you are doing is making an exact copy of the picture. So you could easily just use a copy machine instead. Way faster and the same result. And if you want to add something to the painting, then just copy the picture and add whatever you want to add to the picture with whiteout and pen. Or use photoshop right away.

Should I use a perspective Grid?

You aren´t copying anything line by line like with the grid method but you are establishing the planes and perspective of your drawing.

Pros use perspective grids often, especially when they are drawing objects, that have to be accurately placed in perspective in order to look believable. For example when drawing Citys, cars, or other objects that have little organic shapes.

Why most Professionals don´t use the Grid Method

The biggest reason why most Professionals don´t use the Grid method is because you just create a copy of the object and with this, the image will most of the time just look stiff and dead. It won´t have any of the artists “Soul” in it. I know it sounds weird but I will explain what I mean a bit more detailed.

By not using the Grid method and just constructing the object or subject the artist will put his own thumbprint on the painting. If he or she wants it or not.

And so you will develop your own style over time subconsciously. And that won´t happen if you just copy the object with the Grid method. That only happens if you really pay attention to the object and if you really understand the object. And so the paintings will start to look alive.

3 thoughts on “Is Drawing using a Grid Cheating? Why professionals don’t use Grids.”