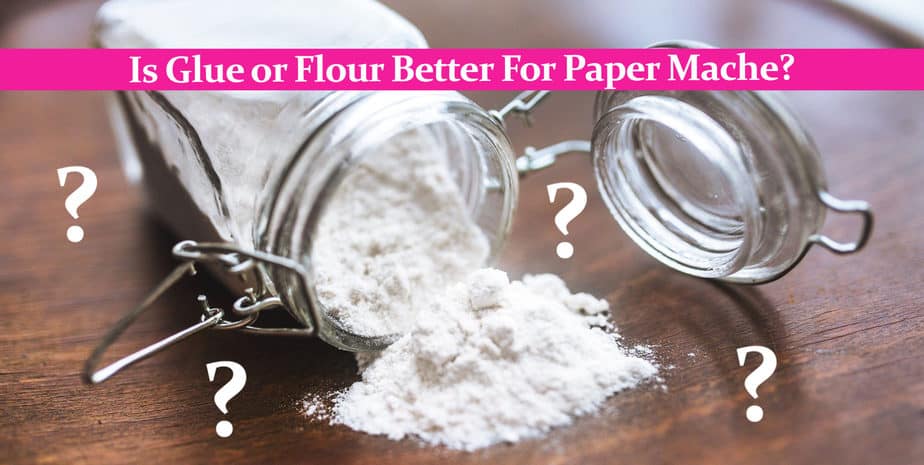 Paper Mache is an awesome medium to work with, it is easy to use, quite cheap and all around just perfect for Kids but also great for adults to use. You can easily create simple or complex forms, paint them and use them for a lot of different things, like costumes, for art or other projects. But before you start, there are some things, that you should consider. One such thing is what kind of mixture to use for Paper mache, glue-based or flour-based? In this article, I will tell you everything, that you need to know so that you can make an educated decision.

What Kind of Glue is Best for Paper Mache?

Pretty much any white glue is good for Paper Mache. The only important thing is, that it is easily diluted with water and if you want to do Paper Mache with Kids then you should use non-toxic glue.

I normally use either wallpaper paste or Wood glue but Mod Podge would be a good alternative as well.

You can get wood glue at your local hardware or crafts store and Mod Podge can be bought at your arts and crafts store or right here on Amazon.

So simply stick to regular wood glue and you should be fine.

If you are using wallpaper paste then make sure it is a normal one as well. There are some special pastes out there that adhere better to textured walls or are very fast drying but, as with the wood glue, these additives may make it hard to use for Paper Mache.

No matter what kind of glue you choose to use you have to dilute it with water. Generally mixing one part glue and one part water will be enough but depending on the exact type of glue you use you may have to use more water.

A good indicator of whether you have the right amount of water is when your mixture is becoming less sticky than it originally was and it has to be quite fluent almost like water.

If you are using wallpaper paste then simply add more water, than the instructions say until you have the right consistency.

Is Using Glue any Different Compared to Using Flour for Paper Mache?

For one I personally think using glue is easier than using flour because mixing it right is easier and the glue mixture is just way stronger than any flour mixture can ever be.

To be honest, using glue is a bit more expensive than using flour but it works so much better than flour and it drys a little faster as well.

Other than these small differences using glue is pretty much the same as using flour but the glue mixture has a lot of advantages over a flour mixture.

The Glue mixture is faster drying, easier to use, drys transparent, doesn´t change the color of the paper, adheres better, doesn´t mold or rot, and so on. It´s just all-around better in my opinion.

Why Do So Many People Use Flour for Paper Mache Even Though it´s Worse?

There are a couple of reasons. One reason is, it’s way cheaper than using glue and it is defiantly not toxic.

So a lot of schools, for example, use it in their crafts classes because they don´t have to worry about toxicity and money and it is still a lot of fun for their kids.

Flour and Water is also the traditional mixture, that is being used for centuries but mainly because they didn´t have the possibility to buy white glue like we do today.

So in a lot of traditional crafts, the flour and water mixture is still used for paper mache, even today.

And even though Paper Mache can rot or mold when you use flour instead of glue there are things you can do to ensure that none of that is happening. It all depends on how you seal the project and how you use it. And many masters do know how to properly seal their Paper Mache to avoid any molding.

But the easier way is still just simply using white glue such as wood glue or wallpaper paste.

Yes, you can but it still won´t be able to stay outside for a very long time. You can use a layer of epoxy to seal your paper mache and make it water-resistant or you can apply a small layer of mod Podge or white glue to make it resistant to small amounts of water.

What Happens if Paper Mache Gets Wet?

If you didn´t seal it at all then it may get soft again. If that happens, then you have to carefully dry it while taking care not to deform it. If you have sealed it properly, then Paper Mache can take small amounts of water without any problems but if it gets soaked then you may have to say goodbye to your project.

Does Paper Mache Get Hard?

Paper Mache normally doesn´t dry hard. The consistency of paper mache is comparable to a very thick paper or cardboard. That being said there are processes, that can make Paper Mache dry hard by using epoxy for example.

Do you have any more Questions about Paper Mache? Then feel free to leave a comment down below and I will try to answer your question as soon as possible.

6 thoughts on “Is Glue or Flour Better For Paper Mache?”