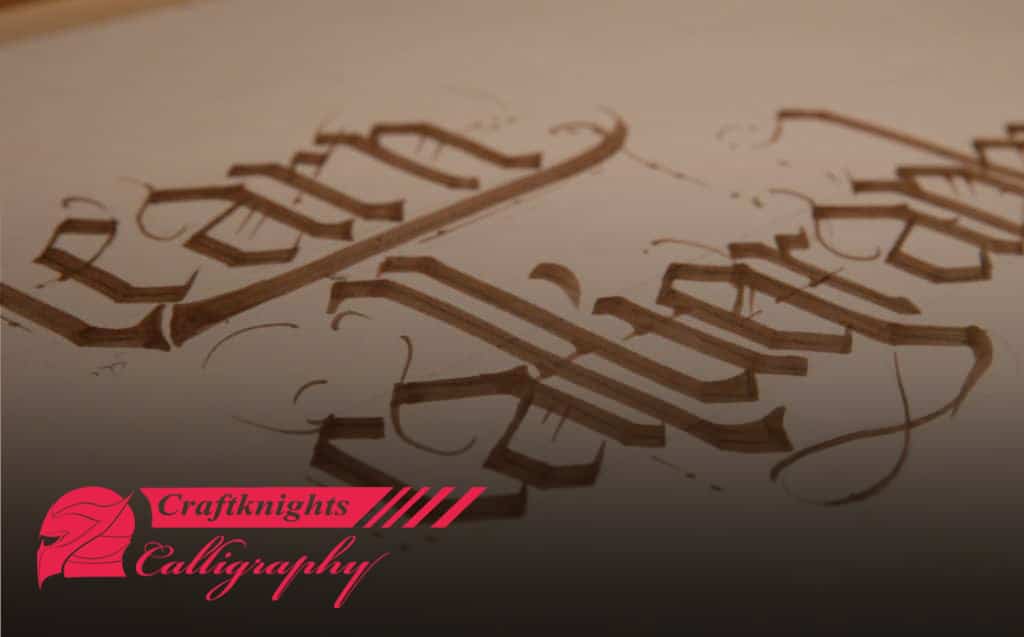 Here are some actual tips, that helped me to improve my calligraphy substantially! But remember, to master calligraphy, there really is no way around practicing. So I will show you the best ways to practice and the most interesting ways so that you don’t waste your time or get bored!

So how do I learn calligraphy fast? The most important things are repetition, technique, and the right resources! Repetition is the key aspect of learning anything really, so try and keep it fresh and entertaining and avoid being annoyed or burned out by boring repetition exercises.

1. Use the Right Practice Sheets

If you look online you will find a lot of practice sheets for learning calligraphy.

I personally don’t like these as they are made with the intention of you tracing the letters or forms of a script or they give you guidelines to follow.

This way of learning will obviously be harder in the beginning but you will learn way faster in my experience.

That doesn´t mean, practice sheets are not useful. Especially the ones, that just give you the baseline and x-height and the printed alphabet in the top quite good.

If you want to learn with the Help of a Worksheet you can download a free Worksheet for a gothic Script on my side here. This Worksheet will let you trace every letter once and after that, you will have to copy it .

2. Exercise in Ways That are Fun For You.

Another trick to learn calligraphy fast is to find exercises that are fun for you. Calligraphy is a skill, that is learned a lot of repetition and the Trick is to make that repetition fun!

First write a sentence in the Script, that you are learning. After that, go back and add some extra decorations or some flourishes.

Have fun with this step, no one will see that sentence it is just a practice for you relax and just try different decorations out.

After you are done write the same sentence again under the original one but this time add the decorations and flourishes as you are writing.

After that, start all over again with a new sentence. Doin this exercise will help get familiar with the script and you are at the same time learning which decorations work and which don’t.

Also, flourishes and Decorations are a lot of fun to do. So even though the exercise is a little repetitive you are not getting bored.

On the contrary, when I am  this exercise I am actually looking forward to writing the next sentence and trying out new decorations.

User other Inks or fill the whole paper

I know other people who like using fancy inks or who just randomly fill their whole paper with letters until no space is left to keep themselves entertained.

Just remember, these papers are for exercise, they are not meant to be art or meant to be sold. So don’t worry too much how they look in the end just enjoy the process of learning and be sure the letters are drawn correctly.

As it is the case with everything in life,

repetition will make you a master.

3. Try and Write a Script From Memory

Now, this is a fun little exercise. Even some calligraphy masters will have a hard time writing some scripts completely from memory. Especially gothic scripts are kind of hard to remember.

But if you can draw a font from memory, then you have truly mastered it!

So choose any text and start writing it in a Script of your choosing. Don´t look at the Scripts alphabet while you are writing the text. Even if you are unsure if you wrote the letter correct or not. Just keep writing and do the best you can.

After you are done, look at the scripts alphabet and see which letters are wrong and witch you wrote correctly. Then, finally, try and write the text again with the script from memory and see if you can avoid your previous mistakes.

It is a fun little challenge to try and complete. It sometimes takes me three or four tries until I got it right. But you will learn a lot and very fast.

I personly like to do this with scripts, that I can already draw regularly but I am not jet confident with. So do try this! It is a real challenge but a fun one!

4. Draw Calligraphy and Don´t Write it!

This Tipp is controversal, I know. But it helped me a lot.

When I started to think of calligraphy as drawing letters and no longer really writing letters my Calligraphy Improved drastically.

Let me explain, what I mean by “drawing letters”.

But if you follow the same logic when you write calligraphy then your words will only be a sequence of individual letters. But instead, you want each of your words to look interesting and beautiful.

So when you stop concentrating on each individual letter and instead focus on the word, that you want to write, and already think ahead, how this work will look, then your calligraphy will all of a sudden look way more organic and more interesting in a very short time.

So Instead of thinking in individual letters, like you do, when you write, think about the word and the way the whole sentence or letter will look, like when you are planning a drawing. Just don´t sketch anything beforehand and try and visualize it in your head.

I know it sounds weired but it helped me out a lot. And I improved drasticly after adapting that Mindset. Though I have to admid, that this tipp won´t be as effective for everyone. But it is worth a try!

This is a common mistake. When you are writing a script pay close attention where the thickest lines are and hold your pen according to these lines in the right angle.

For example, most blackletter or gothic scripts are written with the pen held in a 45° angle. On most worksheets, there is an icon or infobox, that will show you how to hold the pen.

If you don´t have a Worksheet with that Info on it or you are copying the script from another resource then you can easily identify the angle, in which the pen was held.

Just look at the different letters and find the lines, that are consistently the thickest. They all should be at the same angle. That is the angle, the pen was held in while drawing.

You can also use the same method but look at the thinnest lines and the angle 90° apart from that is the right angle to hold the pen in for that script.

This is quite a quick tip. Just follow the guidelines and keep the script consistently in the right angle. This consistency will let your writing just look so much cleaner and better. It’s an instant trick that lets your writing look awesome and professional right away.

This goes back to consistency a little bit. Pay attention to your spacing!

Different Letters should be equally spaced from each other. Words should be consistently spaced apart from each other and sentences as well. This tip sounds easy but it will take a few tries until you get good at it. But when you do it will improve your writing instantly!

This tip is very important!

You won´t be able to write beautiful calligraphy if you use the wrong tools or if you didn´t prepare your tools right!

Number one reason, why so many people quit calligraphy is because they don´t properly clean their Nib before they first use it and then the pen is not producing good sharp lines. So clean your nib from the factory oils before you write calligraphy. In my beginners guide to calligraphy here you can see how it is done and how to assemble the pen correctly.

Use the right paper! You don´t need to use fancy calligraphy paper for exercising. It is way too expensive for that. But you should still use paper, that is actually able to absorb the Ink properly and also won´t catch on the Nib. I recommend thicker nonglossy printing paper or Aquarelle paper, that has very little texture.

This is the one tip, that you should realy take home from this!

Don´t just blindly copy one script after the other and slave away on the text without consciously thinking about the script, that you are writing.

Really try and look at the mistakes, that you made and look at the things, that look good and try to find out why that is. Then try and find a solution and exercise according to that.

This is by far the fastest way to learn. And you will improve by so much, it will surprise you!

So learn and write consciously!

This is the most important point.

Just don’t give up! Even though you are frustrated or even after the tenth time you drew that “S” and it still doesn´t look right, please don’t give up!

Calligraphy is not easy but everyone can learn it as long as they don’t give up and believe me once you did draw that first perfect “S” you will feel a real sense of accomplishment and you will frame that “S” and hang it on your wall!

It is like I said, just please don’t give up and keep on writing, you will be able to learn calligraphy!

You can check out my calligraphy beginners guide for more help if you want. In this free guide, I will show you everything you need to know to start writing calligraphy and you will learn your first three complete Scripts!

Have an awesome day!