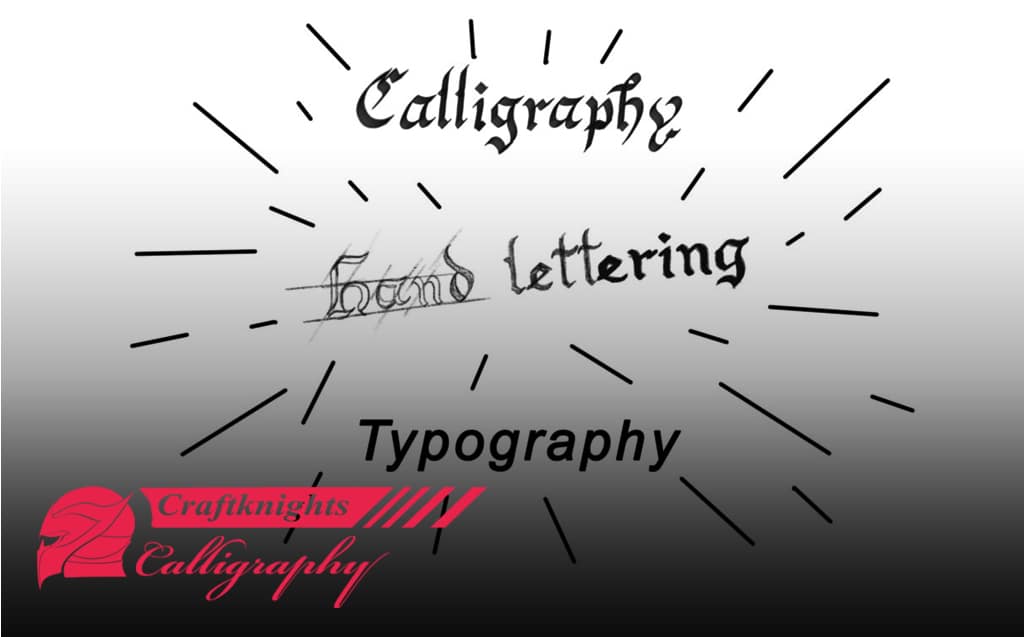 There seems to be a lot of confusion regarding the difference between these three terms. And to answer the question right away, no they are not the same, not at all! There are subtle yet between calligraphy typography and hand lettering.

The fast answer to the question is:

Lettering is the art of dwaring or illustrating letters.

Calligraphy is the art of writing letters.

Typogrophy is the art of using and aranging letters.

This is how ever just the quick and dirty answer to the question. To realy answer the question in its totallity we first have to look at de deffinition of these Terms.

The deffinition for lettering is:

“Lettering is a for a specific single use designed text, that was not written but instead drawn, painted, engraved or cut.”

So this basicly means, that handlettering, as the name suggests, has to be done by hand. But it is not really written either it is drawn. You can see it as a illustration or drawing of letters or sentences. In Handlettering you are most of the time doing a underdrawing or sketch. Another typical thing is mixing different script types and variyng letter heights within a word or sentence. Sometimes Letters are being warped or streched or changes in other major ways to fit the design. But it is not done in a Programm it is done by hand with a tool like pen, marker, chissel etc.

“Calligraphy is the art of producing beautiful handwriting using a brush or a pen or similar tools.”

The main difference between calligraphy and hand lettering is, that hand lettering is completely free in its execution. In Handlettering you can change the letter sizes, the script types and pretty much everything about the script. Handlettering is also more of a Drawing of letters. Calligraphy, on the other hand, is the traditional way of writing letters. Letters are in a fixed size relation to one another, which is determined by the size of the nib, that is being used and the type of script that is being written. Lines are generally done in one fluent motion without an underdrawing and you usually stick to one script type. In calligraphy you have guidelines but you sketch out the individual letters.

Also, calligraphy can be used when writing letters or longer texts unlike Handlettering, which is almost only used for headlines, logos or short illustrated sentences. Calligraphy is traditionally done with a dip pen or brush. But it can also be done with markers or other similar tools.

” Typography is the art and technique of arranging type to make written language readable and appealing when displayed. Examples include typesetting and Graphic design”

So typography has nothing to do with actually drawing or writing the letters. It is more of a collage of different pre drawn types or scripts. In typography every letter will look exactly the same, for example every letter “a” of the same font will be an exact dublicate. Because the fonts are digitised. While with calligraphy and hand lettering the letter “a” of the same script will look very similar but wont be the exact same. Because these letters where written or drawn by hand every time. Typography is mainly used in print or advertising and newsletters or blogs.

Here is a visual comparison side by side

Why even use handlettering or calligraphy?

This is a question I sometimes come across. Why should you even use handlettering or calligraphy, when you can just buy or download a font, that looks like handwritten and use that? The simple answer is: You could do that if there where such a thing like a font that looks like it was handwritten. If you realy look at digital fonts, that are supposed to look like they where handwritten and you compare them side by side with something that realy is written by hand. Then you will notice very quickly that there is a massive difference. The digital font has one major dissatvantage and that is, that every letter “a” will always look exactly the same. Because it always is the exact same letter. While when youwrite or draw by hand the letter “a” will look very similar but also slightly different. Another thing the digital font cant do is change different letters depending on what letter came before and what letter comes after to better “fit” in the word. The best example is a cursive font. If you use a digitall cursive font all the conections have to be on the same height in order to alwys connect correctly to one another. But if you write a cursive script by hand, you litterally write the whole word in one continous complex stroke. So the connections between the different letters will vary slightly from word to word, wich makes every letter and word almost compleatly unique and gives the whole sentence a personality.

It is something that is very hard to describe but if you look at something that is written by hand it just looks so much more alive and has so much more personality than something that was done entirely on the PC. And more and more companies pick up on that and start to realize that, which leads to more and more logo designs and corporate designs that incorporate handwritten elements. Also, some of the most famous Logos in the world are essentially hand lettering. Just look at the coca cola or Disney logo.

Do you want to learn calligraphy?

If you have become curious and want to learn more about calligraphy then you can check my calligraphy beginners guide out. It shows what tools you use for doing calligraphy, how to write calligraphy and I will teach you to write your very first three complete scripts and that for completely free!

1 thought on “What is the difference between Handlettering, calligraphy, and typography?”