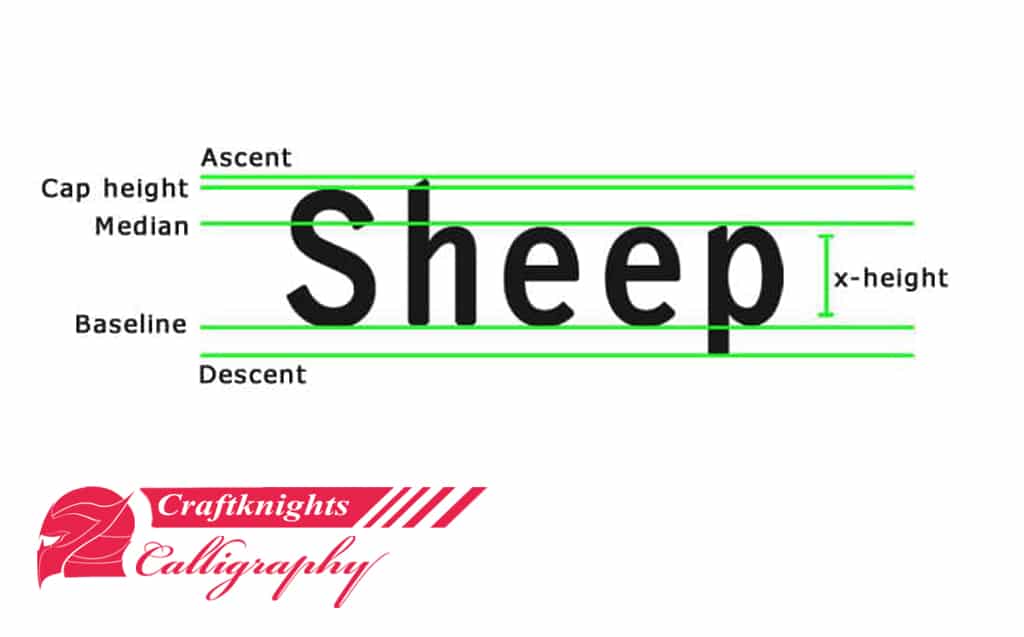 The x-height is the distance between the baseline and the median. This is the size of most small letters in a specific font or script, that ascend or descent, such as the letter w, z or of course x.

Curved letters however , r, u, c, . Will slightly go above or below the x-height. Depending on the font you can have a big x-height and a low capital letter height or the other way around.

There are not really any rules in modern typography. Once you have the x-height of a font, you can calculate or find out the relation to the other heights. This way you can up or downscale any script.

So if you are doing calligraphy and you want to write a script in a bigger scale you can calculate the hights in relation to one another and write the gothic script in four times its scale, for example, without it looking distorted or out of proportion.

What are the other heights?

The shows the height of the letter x and other similar letters. The x-height is measured from the baseline to the median.

The Baseline is the line all letters will sit on.

The descent is the line, that dictates how low a descending letter will go below the . Letters, that descent are p, q, and g for example.

The cap height will show the size of the capital letters.

The ascent will show how far up an ascending character goes. Note, that in most scripts the ascend is slightly higher than the cap height. Ascending characters are h, l or k for example. Although the letter l will sometimes only be as tall as a capital letter, it depends on the script.

How to determine the heights and scale them for calligraphy

How to the nib size a script was written in

This method really only works for scripts that use broad nibs.

In this example, I will use the same gothic script, that I teach in my beginners guide to calligraphy.

So first of all when you see a script you will have to determine which size of nib the writer used to write the script. To do this look at every line and find the thickest lines within the script. The angle these lines are in will also show you the angle, the broad nib was held in when the script was written.

By measuring the thickness of the line you will now have the size of the nib that was used. If you are not sure if you really got the right lines, look at the thinnest lines. If they are all 90° to the thickest lines then you got it right. In our example the nib size is 1.5mm.

How to determine the relative heights

Now, that you determined the size of the nib, that the script was written in, you just draw a little ladder of squares with the same nib (1.5 mm in our example) next to the script.

You should start at the descender line and end at the ascender line. In our example, the x-height of the gothic script is 4 and 1/3 square high. Most of the time you will be surprised to see, that the squares will match up perfectly with the different lines of the hights.

In this example unfortunately not but this is more of an exception. The complete height of the script from the ascender line to the descender line is exactly 10 squares.

How to scale the script up

Now that you know the height of the script, in our trusty square measuring system, you can scale this script up to any size with no problems.

All you have to do is change to the nib size you want to write with, let’s say you want to write this script with a 10 mm sized nib. Just draw a square ladder of 10 squares with the 10 mm nib and draw the lines of the x-height and baseline etc.

Using the square ladder as a reference. For example, the x-height was 4 and 1/3 squares high in our gothic script. with this method, you can easily scale any script .

How to calculate the whole thing

Ok, so let’s say you want the script to have a certain height and you don’t want to try ten different nibs until you get it right or you just want the exact numbers and not squares, then you could calculate the whole thing without using the square trick as well.

To do this you first have to determine the size of the nib, that the script was written in, like before. In our example, it was 1.5 mm. Now measure the distance between the ascender line and the descender line. In our gothic script that distance is 15 mm.

Did this quicklittle guide helpyou to understand the s-height and how to use it?