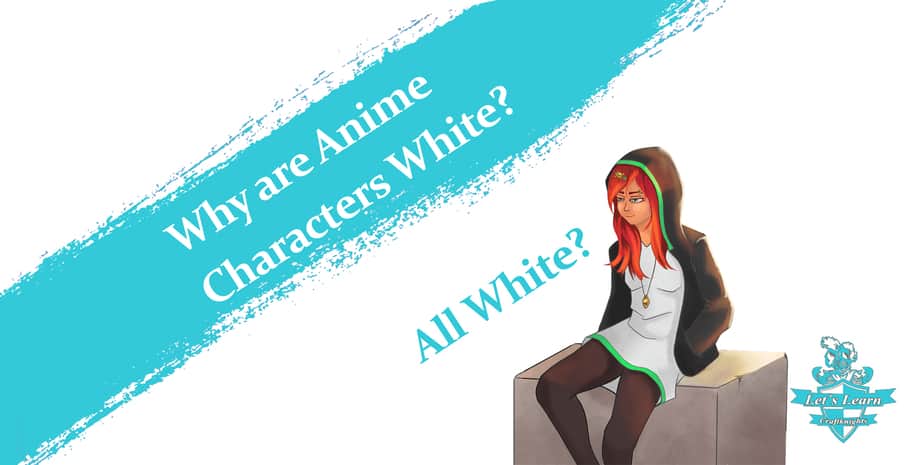 Here is an interesting question! Anime originate from Japan, so they are produced and written in Japan.

Why Do We Think, That Anime Characters are White?

Anime characters have colorful hair, big eyes, white skin and most of the time colorful eyes as well.

All these characteristics are indicative of Western people. We have blond hair or red hair, we have blue or green eyes and a lot of us have white Skin. So from our point of view, Anime characters look very much like western people.

If you look at Japanese people most of them have dark hair, brown eyes and a little bit darker skin. From our perspective, they don’t look like the majority of Anime characters we know.

But you may be surprised, that Japanese people think completely different about this matter!

The Anime style is a very distinct art style that was originally developed to make animation cheaper. So they didn´t use a lot of detail in their animation and over-exaggerated some features like the eyes and the proportions of the head to make emotions easier to read.

They also used common features, that Japanese people find attractive in the new art style to make the characters more appealing. So they made the eyes and the head big and they also gave their characters very white skin.

White skin is commonly found attractive in Japanese culture. That’s why you will see a lot of girls avoiding the sun in order to not get brown. They sometimes even carry a UV-resistant umbrella to block the sun completely.

Because anime is a very exaggerated art style they naturally over-exaggerated the white skin aspect as well.

But most Japanese people don´t think, that their anime characters look like westerners.

What do Japanese People Think About the Origins of Their Characters?

If you ask the Japanese people about the Origins of different Anime characters, you will be surprised, that most of the time they will straight out tell you, that the characters are Japanese.

You will also notice, that the Japanese aren´t really paying attention to the skin color all that much. They are more focusing on the structure of the face, the form of the eyes and the form of the head overall.

These are the features, that Japanese people use to define the origin of characters. Not the color of the skin!

But you don´t have to take my word for it, here is a Video form “That Japanese Man Yuta” showing you how Japanese pedestrians react to this question and how they are trying to identify the origins of different Anime characters!

Anime Characters, That Are From Foreign Countries, Look Just Like Normal Characters From Japan!

There are plenty of Anime characters out there, that aren´t Japanese (in their stories anyway) but still have white skin and the same colorfull hair as other Anime characters in the same show that is storywise from Japan.

The main difference they have, most of the time, is the form of the head and eyes. Rounder Eyes are perceived by the Japanese to be more Japanese-looking and characters with slimmer eyes are perceived to look more European.

Rounder Heads are also more Japanese-looking and a slimmer face with sharper and more defined jaws are being perceived to be more European looking as well.

These may sound like very subtle differences to us but for Japanese, these are the main features they are looking for to identify where an Anime character may be coming from.

What About The Simpsons?

Here is another interesting example.

Have you ever watched the Simpsons and wondered why they don´t look like a regular American family even though they are clearly portraited as such and they live (mostly) in a very similar universe than we do?

I personally haven´t. I just accepted the animation style as just that. An exaggerated art style to further abstract the humor and make it more unrealistic and over the top.

And this animation style is properly way cheaper than Disneys old school animation as well.

And that is the exact same thing as with animes and the Japanese people.

Anime is just an exaggerated art style to mirror but also abstract the Japanese culture. With their behavior and their looks.

The Behaviour of Anime Characters Also Greatly Differ From Reality

Not only the art style but also the behavior of the anime characters greatly differs from reality.

One example is the body bubble. In Japan, everyone is extremely polite and very aware of each others personal space. You will rarely see people holding hands or hugging each other on the streets.

In anime though, these tabus and the politeness are greatly reduced and overreaction is played to comedic effect.

Anime characters can be loud and can joke freely around. All things, that Japanese people would rarely do in public.

Only Western Fans of Anime Believe, That Anime Characters are White.

As mentioned above, only western fans think, that Anime characters are white. Japanese people don´t care about the color of the skin as much as we do.

If you ask someone from Japan, why their Anime characters are all white, they won´t even really understand your question!

Another theory to why western fans think, that anime characters are western, is because they are imagining themself in the role of the protagonist or their favorite anime character. That is also why cosplay is such a big thing in western countries nowadays.

It is completely normal to follow the adventures of a character and wanting to be part of it and imagining to be part of their universe and maybe subconsciously we then start to imagine our anime heroes to be western and that is the point when we start to ask the question ” if they are from japan then why are they not looking more like Japanese people and actually more like I do?”

So I hope, you could understand the problem with this question. At its core, this whole thing is a cultural misunderstanding. Anime characters are not white, they are simply idealized abstractions of reality!