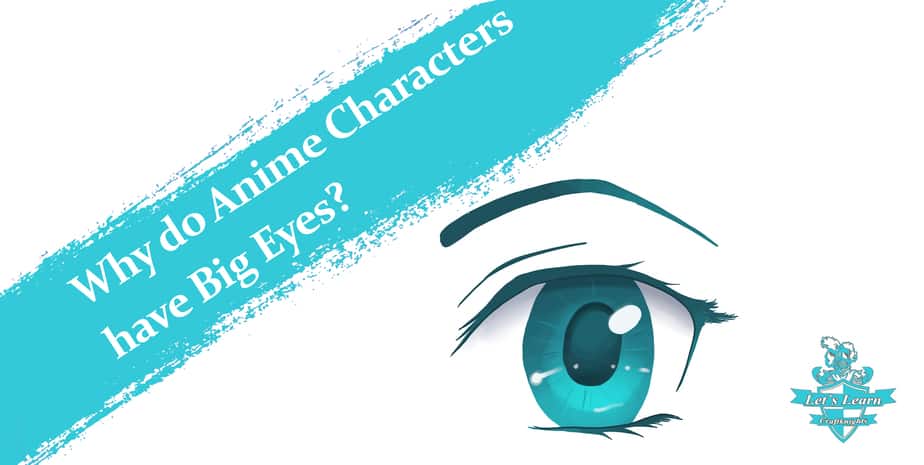 But why do Anime characters have big eyes? Like with any big art styles, there was someone who pioneered it. In Anime that someone is Osamu Tezuka. He developed his art style by looking at early western Animations, especially Walt Disney, and he started drawing disproportionately big eyes to better show a large range of emotions.

Where Exactly Did the Anime Style Originate?

Like I mentioned above, the gentlemen who invented and inspired the style, which is known as Anime today, is called Osamu Tezuka. He was inspired by Walt Disney’s first animated movies and short films.

In 1937 the first feature film from the Walt Disney Company “Snow White and the Seven Dwarfs” was released and quickly became a massive success! This movie and other smaller animations from Walt Disney inspired a lot of Japanese animators like Osamu Tezuka.

He adapted the Style of these Animations and simplified them even further to make the Animation cheaper. He also limited the number of frames to further save money on the Animation.

This money-saving measure was originally only meant for the first few Animations until he had more budget for more refined techniques.

But even though anime is way cheaper than regular animation or Disney animation it is still very expensive. One single season of Anime style animation can cost millions.

But after the first shows aired this style became known as Anime and was used deliberately in future Animations even though the Budget for more refined Animations would have been available.

Osamu Tezuka was called “the father of Manga” and “the God of Manga” and a lot of artists were inspired and influenced by his style. Some of his best-known works are “Astro Boy” and “Black Jack“.

In the 1980s the first Anime was translated and aired overseas.

Following this little initial success, even more, Animes were translated and aired outside of Japan in the 1990s with the first big success Animes like “Sailer Moon” and “Dragonball”.

And finally in the 21st-century studio Ghibli created the world success “Spirited Away” and even won an Academy Award for the Best Animated Feature.

Why are Anime Eyes so Big?

The main Reason is to convey emotions easier. This way animators could concentrate their efforts of the eyes when it came to showing emotions and didn´t have to animate the stance or pose of the Character to much.

This was cheaper and turned out to be a very effective method. It was also faster to animate only the eyes and not focus too much on the rest.

But money wasn´t the only reason. The Japanese culture was another one.

In the western world, we convey our emotions mainly through our body language and our mouth. Not by speaking but by smiling, frowning or screaming.

But in eastern countries, people don´t show their emotions as open as we are. They are either hiding their emotions behind their hand, by covering up their mouth for example.

Or they don’t react in any way at all. This is seen as polite. So in Japan, for example, if you want to know what your opponent is feeling you will have to look in their eyes. Emotions can´t be masked as easily in the eyes. So Japanese people are used to looking in the eyes to read the emotions of others.

Another reason is that we are all positively drawn to big eyes. Big round eyes make characters look innocent and young. Just think back to the famous “Bamby eyes”.

This is the reason why bad characters in Anime, most of the time, have smaller eyes. This is not the case for all Animes but a lot of the older Animes used this trope a lot! Because it works.

Are all Anime Eyes Big?

No, not at all! Especially the more modern Anime have a lot more characters with smaller eyes. But the Eyes are still bigger than normal and other areas of the animations are still oversimplified.

So overall Style of Anime is obviously going to evolve further, as all styles do. But the core features of Anime (Big eyes, Simple Forms, Simple Light and Shadows, etc.) will largely stay unchanged.

If you are interested in learning how to draw anime eyes then you check out this guide on drawing anime eyes.